Delhi vs Centre Again - This Time Over Vaccine Shortage

Manish Sisodia claimed that the Delhi government had ordered 1.34 crore doses, but the centre had only approved 3.5 lakh jabs. 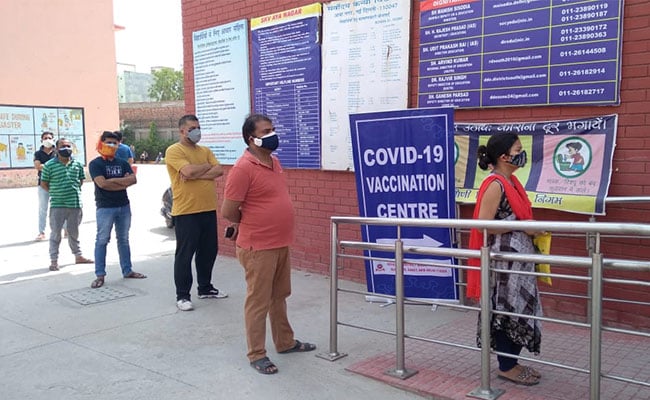 The back and forth between the AAP-led Delhi government and the BJP-led centre on who is to be blamed for the national capital's chaotic response to the coronavirus situation continued unabated on Monday. The topic of today's exchange of accusations was a shortage of vaccines in the city - both sides gave contradictory figures for the jabs ordered by the Delhi government in May.

In response to Delhi Health Minister Satyendra Jain's remark that stocks of both the approved vaccines - Covishield and Covaxin - would be consumed in the next four days, BJP spokesperson Sambit Patra, in a virtual press briefing, said the Aam Aadmi Party (AAP) government was playing politics over the coronavirus crisis and accused it of ordering only 5.5 lakh doses.

"We ask Arvind Kejriwal... you had addressed a press conference on April 26. You had approved the purchase of 1.34 crore vaccines... He was praised all around that he had placed an order worth around Rs 1,400 crore. Today, they are saying we have nothing... In reality, Arvind Kejriwal has placed an order for 5.5 lakh vaccines -- 4 lakh Covishield and 1.5 lakh Covaxin," he said.

The AAP refuted the BJP leader's claim strongly. It shared letters on its social media handles claiming they were evidence that the centre had been "cutting short vaccine supplies to states and selling that to foreign countries".

➡️Delhi Govt had ordered 1.34 CRORE vaccines in April itself

➡️Central Govt said only 3.5 LAKH vaccines can be given to Delhi in May

Delhi Deputy Chief Minister Manish Sisodia, in a press conference later, claimed that his government had ordered 1.34 crore doses, but the centre had only approved 3.5 lakh jabs for the national capital in May.

"...The central government in a letter told us that we can have only around 3.5 lakh doses in May," he said.

"When people were dying in the country, the centre sold off 6.5 crore doses to other countries… but the BJP today is shamelessly making false allegations that the Delhi government had ordered only 5.5 lakh doses," he added.

He said the BJP had sold off vaccines abroad out of greed. He also accused the centre of ushering in devastation in the country by organising the Kumbh Mela, which has been branded by experts as a super-spreader event.

Delhi has been reporting hundreds of deaths every day as a more dangerous wave of infections ravaged the city and surrounding areas, triggering severe shortages of medical oxygen, hospital beds and medicines.

The AAP government and the centre have also been fighting a pitched battle in courts for weeks over supply of oxygen to the national capital's hospitals, many of whom have been sending out SOS messages for the live-saving gas.

Several instances of people dying without oxygen in and outside hospitals in the Covid-ravaged parts of the country have sent shock waves across the world.

Many countries have rushed in critical medical supplies to augment India's efforts against the pandemic.