Big Turnout At Peace March Called By Cops In Howrah, No Social Distancing

Coronavirus: Sources said even the police were taken aback by the size of the turnout for the peace march at Howrah 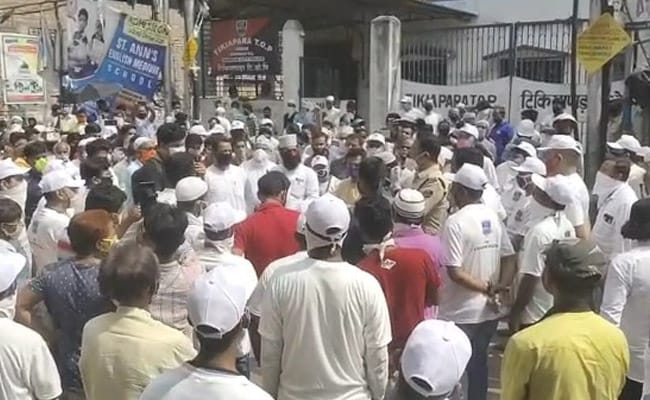 Coronavirus: A huge crowd turned up at the peace march called by police in Howrah

Six days ago, the police in Kolkata's Howrah was attacked by a mob when they tried to disperse a huge crowd that had gathered on Tikiapara lane. Thirteen people have been arrested for the attack on the police.

On Sunday, hundreds poured out on the same road again, but this time they were led by the police.

Sources said the police had called for a peace march at Tikiapara lane after the face-off on April 28, when two policemen were injured.

But a huge number of people poured out on the street on Sunday as people from the buildings along the lane showered petals on them.

Today while patrolling in Tikiapara,people came out suddenly & xpressed thanks to police.
They also threw petals on patrolling party from roofs.
On seeing the crowd, Police xpressed thanks for support and requested people to return to their homes.#OperationCovidZeropic.twitter.com/wsQWppMAaU

Sources said even the police were taken aback by the size of the turnout. The photos clearly show that social distancing was impossible under the circumstances.

West Bengal is already under the scanner over alleged failure to enforce the coronavirus lockdown. The Home Ministry has written several letters to the Mamata Banerjee government, alerting it to the scenario being reported by intelligence agencies to the centre.

On April 28, the policemen were trying to disperse crowds at a roadside market that had suddenly mushroomed. The angry crowd then threw stones at the police and chased them. The police had to flee for shelter into the Tikiapara police outpost. But the mob stoned the police outpost too. At least two police vehicles were ransacked.

Howrah is a hotspot district for COVID-19.