A peace votary, 30-year-old Mir was shot dead by terrorists at Wahibug in the terrorism-infested Pulwama district of south Kashmir on Sunday afternoon when he was on his way home. 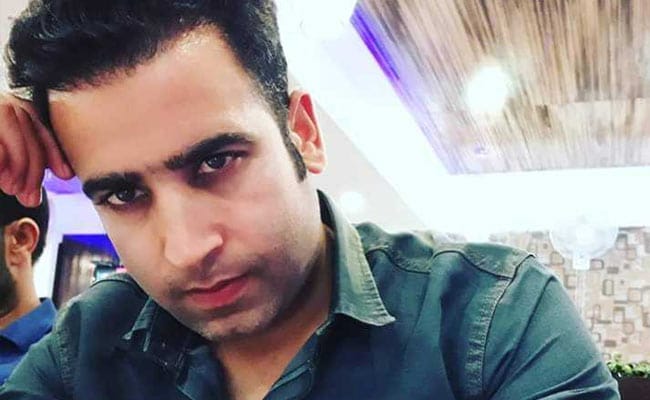 Posted in the CID department, Imtiyaz Ahmed Mir had been warned against venturing into his village

The desperation to see his parents prompted Jammu and Kashmir Police's sub-inspector Imtiyaz Ahmed Mir to shave off his beard and change appearance in his unsuccessful attempt to dodge terrorists who had laid a death trap for him in his village, his colleagues said on Sunday.

A peace votary, 30-year-old Mir was shot dead by terrorists at Wahibug in the terrorism-infested Pulwama district of south Kashmir on Sunday afternoon when he was on his way home.

Posted in the CID department, Mr Mir had been warned against venturing into his village as there was a possibility of attack by terror groups, who have been targeting policemen in the state recently.

"I had told him that he should not go as militants could attack. But he was desperate to see his parents who reside at Sontabugh in the interiors of Pulwama district," recalled one of his supervising officers.

This morning as he was preparing to leave for home, he came with a changed appearance. He shaved off his beard and decided to use his personal vehicle to go to his native village, the officer said.

"Now they (terrorists) will not be able to recognise me" were possibly his last words to his officer before he left for home with a smiling face as he was seeing his parents after a long time.

Mr Mir is survived by his father and mother.

A passionate officer, who was considered as an able person in handling operations, was pained to see his colleagues getting killed by terrorists, especially on the day of Shab-e-Qadar, the holiest night in the fasting month of Ramzan, when two policemen were killed in Pulwama.

"How many lives more do you want!! How can a Muslim kill another one.... how could that killer eat sehri after making a child orphan!! Is there anyone who is going to fill the void !!!! For heavens sake stop this mindless violence ... I don't blame anyone except India and Pakistan who are making merry in their own countries and killing people mindlessly !! Talk peace !! Talk peace !!talk peace!! Cant bear it now!!!"

Son of a retired police officer, Mr Mir, who was from 2010 batch of sub-inspector, had served in Ganderbal district of south Kashmir for five years before being transferred to Kulgam district last year.

He was shifted to the CID department in March this year and his superiors recalled his dedication towards his work.

Terrorists have been targeting policemen in the state and killed two special police officer and a constable last month, triggering an unrest in the lower ranks of the force with some SPOs declaring their resignation on social media.

In fact, some terrorists had claimed that Mr Mir had also submitted his resignation.

When the body of Mr Mir was being brought to Pulwama district lines by a police team from Wahibugh, it was attacked by stone pelters as security forces had launched a cordon-and-search operations in Chewa and the area where he was shot dead.

The police have also launched a probe to ascertain how the information about his journey to home had been leaked to terror groups, who had been waiting to ambush him at Wahibugh.

Reacting to the police officer's killing, former Jammu and Kashmir Chief Minister Omar Abdullah said, "Very unfortunate & highly condemnable. These killings are aimed at destroying the morale of the police force & we must guard against all such attempts. My heartfelt sympathies to the family & colleagues of Mir Imtiyaz."

A wreath-laying ceremony for Mr Mir, who was killed "in a cowardly act of terror", was held at the District Police Lines in Pulwama, a spokesman said.

His Facebook page was full of condolence messages from his friends and others who remembered him as a soft gentleman.

Ranji cricketer from Kashmir Valley Samiullah Beg recalled his meeting with Mr Mir, saying a "few years back, a good looking police officer came up to me amid a large public gathering, during my site visit in my area and asked for autograph. Surprised as I was, I enquired more and he turned out to be an ardent cricket fan from south Kashmir, who had followed my career from ab-initio. He had more knowledge of my cricketing milestones than even closest of my friends".

"Years later, today I saw his body on Facebook, being shot dead...Kashmiris are getting killed across the divide and their seems no immediate end to it. Unfortunate! Is the word."