Speaking at the conclusion of today's Congress Working Committee meeting, Sonia Gandhi, 73, said she was "hurt" but held "no ill-will". 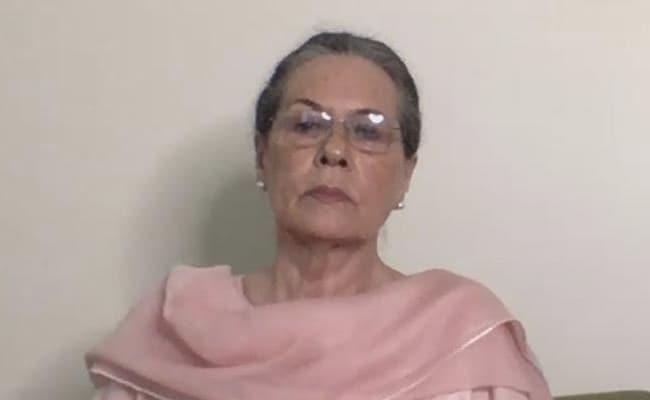 Sonia Gandhi will remain as interim Congress President, it was decided at a CWC meet today

Interim Congress chief Sonia Gandhi offered dissenting voices in her party an olive branch on Monday evening, after an explosive seven-hour virtual meeting of the CWC - called over a letter challenging the Gandhi family's control of the party - finished with her agreeing to remain in temporary charge.

Speaking at the conclusion of today's meeting Mrs Gandhi, 73, who was roped into returning as a stand-in President last year following Rahul Gandhi's resignation, said she was "hurt" but held "no ill-will".

"I am hurt but they (the senior leaders who signed the controversial letter) are my colleagues. Bygones are bygones, let us work together," Mrs Gandhi said.

Hours earlier she opened the online meeting of the Congress Working Committee - the party's highest decision-making body - by announcing she wanted to be relieved of the top job.

By the end of the day Mrs Gandhi was persuaded to remain in charge, but a six-month time-frame was set for the AICC (All India Congress Committee) to launch the search for a new (and permanent) chief.

Speaking to NDTV after the meet Ghulam Nabi Azad, one of the leaders who signed that letter, said he was "satisfied with the outcome".

Sources said that at no point during the meeting did any Congress leader express criticism of the Gandhi leadership. Former Prime Minister Manmohan Singh moved a resolution asking Sonia Gandhi to continue or, if that was not possible, other leaders asked that Rahul Gandhi return as President.

Mr Gandhi, who has repeatedly said he is not interested in returning to the top post, hit out at the letter's signatories today, questioning such a move "when the Congress was at its weakest with crises in Madhya Pradesh and Rajasthan and when Mrs Gandhi is unwell".

The signatories cited uncertainty over party leadership and a drift that had left workers demoralised, and called for a full-time, visible leadership".

The letter sought sweeping changes in the organisation, including elections at every level, decentralisation of power (and empowerment of state units) and the formation of a "collective leadership".

The document sparked a furious response from Gandhi loyalists, with Punjab Chief Minister Amarinder Singh leading the charge; Mr Singh insisted the Gandhis were still the "right fit for the leadership role".

Meanwhile, senior BJP leaders Shivraj Singh Chouhan and Uma Bharti commented on the chaos within the Congress camp, with Uma Bharti declaring the Congress was "finished".