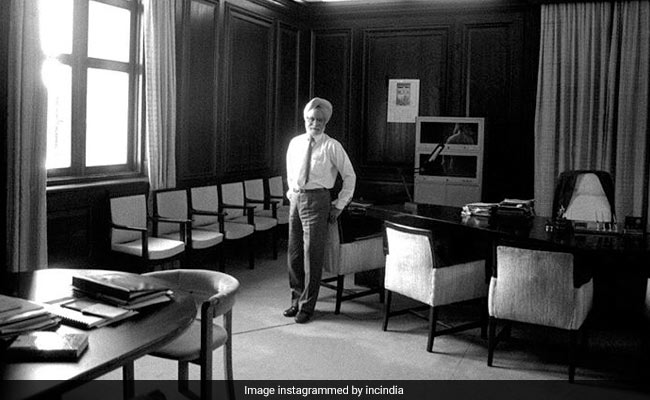 The Congress posted a nostalgic black-and-white photo of former Prime Minister Dr Manmohan Singh on Instagram in which he is seen standing in his office after presenting the Union Budget in 1991 - the year India opened up the economy with massive tax cuts and big foreign investments.

Dr Singh then served as Finance Minister in the Congress government led by former Prime Minister Narasimha Rao. The two were instrumental in the economic liberalisation of India.

Mr Rao and Dr Manmohan Singh boosted India's economy with import tariff cuts, less taxes, more foreign investments and other measures that eventually led to liberalisation of the economy, whose results were seen towards the end of the millennium when the country's growth skyrocketed.

"Finance Minister Dr Manmohan Singh in his North Block office after presenting the 1991 budget," the Congress party wrote in the Instagram post.

Dr Singh also joined Congress chief Sonia Gandhi and her son Rahul Gandhi on giving their best wishes to the Telangana unit of the party for organising a year-long celebration on the birth centenary of Mr Rao, who was born in Andhra Pradesh decades before Telangana was created.

"Govt took office after sad demise of Shri Rajiv Gandhiji. I said 'he's no more but his dream lives on; of ushering India into 21st century; of a strong, united, technologically sophisticated but humane India.' Dedicated budget to his inspiring memory," Dr Singh said.

That was a difficult era in politics. Endowed with a cool temperament and deep political prowess Narasimha Rao ji was always open to debates and discussions. He always tried to take the opposition into confidence: Former PM Dr. Manmohan Singh#PVNarasimhaRao

"PV Narasimha Rao ji can be called father of Economic Reforms in India. He was an important member of the Congress, working closely with Late Smt Indira Ji & Shri Rajiv Ji. He was chosen to become Congress President after assassination of Shri Rajiv ji," Dr Singh said.

The letters by the Gandhis are significant and rare as Mr Rao was known to have had frosty ties with the Gandhis for the most part of the 90s, starting from the time when he became Prime Minister in 1991 - he was the first leader outside of the Nehru-Gandhi family to last a full-term as Prime Minister.