The comment drew a sharp reaction from the Congress members who shouted in protest and started moving into the well. 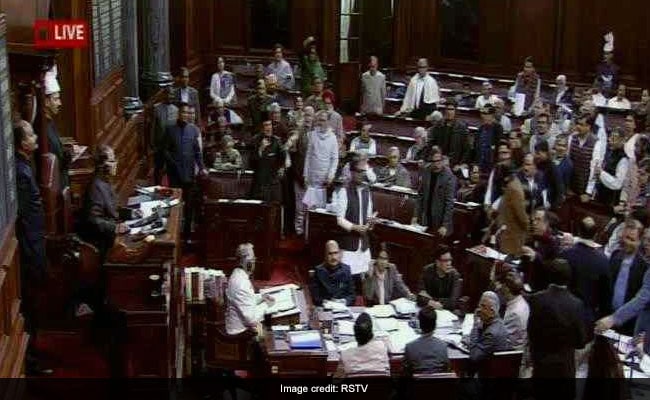 Congress members trooped into the well of the house shouting slogans after Mr Chowdhary, TDP lawmaker, said the division of Andhra Pradesh in 2014 was carried out in a "hasty, unjust and unscientific" manner.

Chairman M Venkaiah Naidu said the former minister had been allowed permission under Rule 241 to make a statement on reasons for quitting the Union Cabinet.

The two TDP ministers had resigned after the party pulled out of the government over the issue of special status to Andhra Pradesh.

Mr Chowdary began by thanking Prime Minister Narendra Modi and his party leader N Chandrababu Naidu for giving him an opportunity to be part of the cabinet and then went on to state that he was making the statement to set the perspective right and "separate truth from propaganda".

He said the division of Andhra Pradesh in 2014 was done in a "hasty, unjust and unscientific manner" and the government of the time should have kept to states at par for 10 years.

The comment drew a sharp reaction from the Congress members who shouted in protest and started moving into the well.

Mr Naidu asked YS Chowdary not to deviate from the approved text of the statement and anything that he said beyond it would not go on record.

But this did not satisfy the Congress members who started to move into the well with some holding placard supporting a special package for Andhra Pradesh.

Mr Naidu said the house was not a place to play politics and adjourned the proceedings till 2 pm.

Earlier the house mourned the death of its former member Hamida Habibullah.

A qualified nurse who served in the military hospital in Lucknow till World War-II, Ms Habibullah died on March 13. She was 101.

A social worker, she represented the state of Uttar Pradesh in the house from April 1976 to April 1982, Mr Naidu said.

Promoted
Listen to the latest songs, only on JioSaavn.com
"In passing away of Shrimati Hamida Habibullah, the country has lost a distinguished parliamentarian, an able administrator and a dedicated social worker," Mr Naidu said reading an obituary reference.

Members stood in silence as a mark of respect to the memory of the departed.