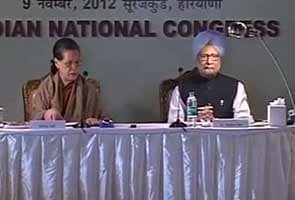 New Delhi: Sonia Gandhi and son, Rahul, stepped out of home early today to take a bus to Surajkund, where the Congress' top leadership is holding a day-long brainstorming session to discuss political and economic challenges ahead of the winter session of Parliament and as the run-up to the Lok Sabha elections in 2014 begins.

Sonia Gandhi, wrapped in a beige embroidered shawl to counter the early morning chill in Delhi, was not slated to ride on the bus. Neither was Rahul Gandhi. But all other 70-odd delegates,  including senior central ministers had been instructed to leave behind their visible sign of power -  lal batti-fitted government cars - and travel together in two buses, the aam admi's means of transport.  Prime Minister Manmohan Singh travelled to Surajkund on his own as scheduled.

All the Congressmen first reported at the 24, Akbar Road Headquarters. They then sat in the buses, one of which was parked at Sonia Gandhi's 10 Janpath residence next to the Congress office to pick up Mrs Gandhi and Rahul.

The Congress leadership has shortlisted three key issues - the current political situation, economic challenges and its track record in fulfilling poll promises - as its agenda for the meet. Each of the 70 delegates (35 party leaders and 35 ministers) who are supposed to be present at the meeting - christened Samvad Baithak - has been given a copy of the 2009 Congress manifesto for easy reference. "You know coalition governments present some difficulty, but we have to review its implementation," said Janardhan Dwivedi, the Congress general secretary, who is in-charge of organising the session.

Congress president Sonia Gandhi will start off the proceedings with her opening remarks, meant to be an assessment of the current political situation. A debate on the political situation will soon follow. Thereafter, the Prime Minister will start a discussion on the state of the economy and hand over the floor to Finance Minister P Chidambaram, who will start a debate on the economic situation. The government is faced with the challenge of pushing economic growth, control growing fiscal deficit and avoid taking unpopular and harsh measures.

The other big challenge for the Congress and the government would be to manage its numbers in the Winter Session of Parliament. The BJP, Left and even former ally, Mamata Banerjee, have asked the government to take a vote on the issue of FDI in Parliament. Though the government is not required to do so constitutionally, the opposition argues majority of the political parties are against the move to allow FDI in multi-brand retail. And to prove that, the opposition is keen on a vote. To add to the government's problems, its supporting parties like Samajwadi Party and Bahujan Samaj Party too have opposed the FDI decision.

Another political challenge for the government is the emergence of activist-turned-politician Arvind Kejriwal. With an-expose-a-week regime, Mr Kejriwal is trying to damage the credibility of both the Congress and the BJP. But being the ruling party at the Centre, Congress seems to be at a greater disadvantage.

In fact, such has been the impact of Mr Kejriwal's press conferences, that many in the opposition have started predicting that the government may be forced to go for early elections. Even though the Congress has been dispelling all such suggestions, many ruling MPs privately admit that they are already making more trips to their constituency now.

"In that context, it is perhaps wise that we remind ourselves of the promises we made and what we can achieve in the next one year of our government," says a senior Congress minister who will attending today's meet.

The Congress, on its part, has already signalled a fightback by holding a massive rally at Delhi's Ramlila grounds. "We have called this rally to tell the people through you that we will face the challenges thrown at us and come out successful," said Sonia Gandhi, addressing the Congress supporters on Sunday.

But it's clear that beyond brave words, the Congress will now to have devise a strategy to regain popular support. And how hard the Congress will have to work will perhaps be known by December 20, when the results of assembly polls in Gujarat and Himachal Pradesh are out.