Narendra Singh Tomar said the government is open to holding talks with farmers, asserting, "If any farmer wants to speak to any government representative on these bills even at midnight, we are ready." 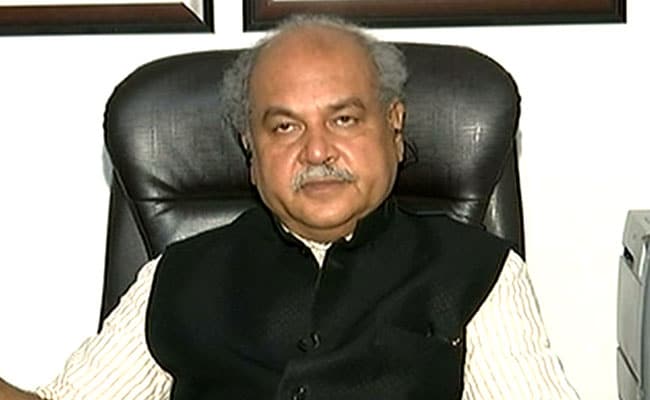 The BJP on Thursday accused the Congress of "double-faced" politics over the contentious farm bills and said Rahul Gandhi should first disassociate his party from its 2019 election manifesto if he wanted to opposed these legislations as it had also promised what the Modi government has done.

With the Congress and several other opposition parties, besides its ally Shiromani Akali Dal, vehemently protesting the bills, which have been passed by Parliament, BJP leader and Agriculture Minister Narendra Singh Tomar reiterated the government's commitment to farmers' welfare and said the new measures would bring them remunerative price for their produce.

Mr Tomar also said the government is open to holding talks with farmers, asserting, "If any farmer wants to speak to any government representative on these bills even at midnight, we are ready."

Addressing a press conference, Mr Tomar, who had piloted the two bills through the both Houses of Parliament, claimed that opposition members' criticism during debates was never about the provisions of these proposed laws but on things they did not have or other unconnected issues.

Reacting to the demand that there should be a law to ensure that farmers are not paid less than the minimum support price (MSP) when the proposed laws come into force, he said MSP was always an administrative decision of the government and will remain.

"Why did the Congress not bring a law during its 50 years of rule if it thinks this was necessary," he asked.

He also cited reports of various commissions and reported views of Sharad Pawar, who was agriculture minister in the UPA government, to assert that these farm bills are in line with their recommendations.

Asked about Rahul Gandhi's charge that the Modi government had harmed farmers and was now doing "PR", Mr Tomar said the Congress leader should first withdraw his party's manifesto if he wanted to oppose these bill.

If he agrees with the Congress manifesto of the 2019 Lok Sabha elections, then he should join efforts in educating farmers, Mr Tomar said.

The Congress is "misleading" farmers and practising "double-faced" politics, he said, adding that this will weaken the party and the nation as well.

Highlighting the Modi government's pro-farmers policies, he said it has given Rs 7 lakh crore to them through purchase of their produce in its six years of rule, which is more than double of the USA's 10 years.

The new laws will allow farmers to get paid for their produce in advance, help them move to products which will fetch them better price, allow them to sell their produce outside agriculture 'mandis' without paying any taxes, he said.

"Farmers, so far, were forced to sell their produce in mandis. In Punjab, there's 8.5% tax in the mandis on several items. Now, through these bills, farmers will now be able to sell his produce even outside the ambit of the mandi, even outside his state at any price he chooses," Mr Tomar said.

Parliament has passed three farm reform bills -- the Essential Commodities (Amendment) Bill, Farmer's Produce Trade and Commerce (Promotion and Facilitation) Bill and the Farmers (Empowerment and Protection) Agreement of Price Assurance and Farm Services Bill -- in the Monsoon Session, which concluded on Wednesday.

The Opposition has called these bill as "anti-farmers".

The Farmers' Produce Trade and Commerce (Promotion and Facilitation) Bill seeks to give freedom to farmers to sell their produce outside the notified APMC market yards (mandis). This, the government says, is aimed at facilitating remunerative prices through competitive alternative trading channels.

The Farmers (Empowerment and Protection) Agreement of Price Assurance and Farm Services Bill, 2020 seeks to give farmers the right to enter into a contract with agribusiness firms, processors, wholesalers, exporters, or large retailers for the sale of future farming produce at a pre-agreed price.

The Essential Commodities (Amendment) Bill seeks to remove commodities like cereals, pulses, oilseeds, onion, and potato from the list of essential commodities and will do away with the imposition of stock holding limits.

They will become laws after getting assent of President Ram Nath Kovind and being notified.