The country's partition could have been avoided had the Congress not made the mistake of "censoring" the national song "Vande Mataram" as part of its appeasement policy, BJP president Amit Shah said on Wednesday.

"Had the Congress not made the mistake of censoring the national song Vande Mataram to just stanzas instead of the whole song, we could have stopped India from getting divided," Mr Shah said in Kolkata while addressing the first Bankim Chandra Chattapadhyay memorial lecture organised by the Dr Syama Prasad Mookerjee Research Foundation to mark the Bengali writer's birthday.

"Historians blame the Khilafat movement or the Muslim League's two-nation theory for India's partition. But I am sure that the appeasement politics that Congress introduced by censoring Vande Mataram as a national anthem led to the country's partition in the long run," Amit Shah said.

Mr Shah said Bankim Chandra, who composed Vande Mataram, ushered in the renaissance of India's cultural ethos and described Vande Mataram as a manifestation of the country's centuries-old tradition of nationalism. 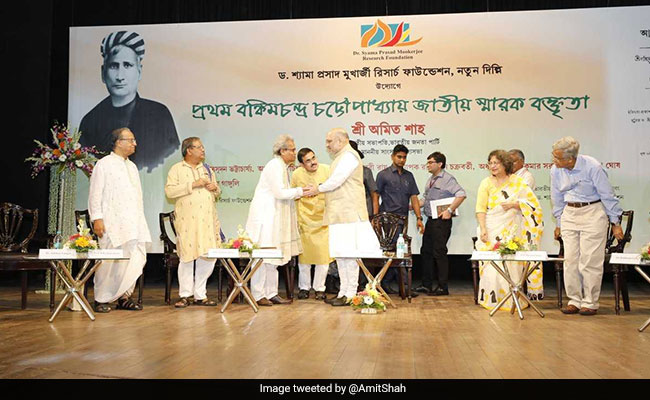 "India is not a geo-political nation, it is a geo-cultural nation. The definition of India's nationalism is not narrow," said Mr Shah, who is on a two-day tour of Bengal.

"Vande Mataram was never related to a particular religion or religious belief. The song does not criticise or ridicule any community. It attempts to connect the nation with its people and manifests the tradition and culture of the region where it was produced. So bringing religion into Vande Mataram was a big mistake," Amit Shah said.

The BJP president, however, said with the party coming to power in the centre, the situation in the country has changed.

Referring to Bharatiya Jana Sangh founder Dr Syama Prasad Mookerjee, who served as industry and supply minister under Jawaharlal Nehru before quitting the Congress, Mr Shah said Dr Mookherjee decided to form the Jana Sangh as he found the policies of independent India to be heavily influenced by the West.

Amit Shah said Dr Mookherjee knew that leaving the Congress would eradicate his chance to win another election for a long time as the Congress, at that point, was heavily banking upon its contribution to India's freedom movement and no other political party had any chance to come to power.

"But still he formed Jana Sangh because he found that the new policies formed under the Congress regime was heavily influenced by western culture and lacked the fragrance of India's culture and heritage. They did not have any connect with the country's culture, tradition or fundamental ideas," Mr Shah said. "No matter how much we may grow, we can't abandon our roots. If any society loses its connection with the root, it would certainly fail," he added.