Mayawati said that the SP and BSP haven't come together only to win the polls, but to also represent the interests of Dalits, Muslims and other religious minorities 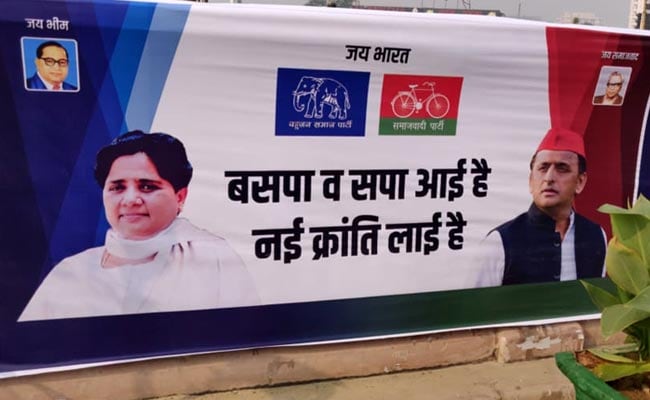 Mayawati and Akhilesh Yadav made a joint announcement in Lucknow.

Former UP chief ministers Akhilesh Yadav and Mayawati have today announced the emulsification of the Samajwadi Party (SP) and Bahujan Samaj Party (BSP) for the upcoming national election. The BSP chief said that the two parties will contest an equal number of seats in the Lok Sabha elections and the remaining of the 80 seats will go to the Congress without an alliance and an ally of the new gathbandhan.

"It's a well-thought-out division of 80 seats. Both SP and BSP will contest 38 seats each and an ally will get two seats. Congress can contest Amethi and Raebareli, but outside of the alliance," Ms Mayawati said in Lucknow.

Both the leaders said their alliance will ensure the BJP's defeat in the state. Condemning the CBI raids in the sand mining scam and reports that Akhilesh Yadav will be questioned for his role, Ms Mayawati alleged that the BJP manoeuvered the raids.

"Our deal was closed in Delhi on January 4. But soon after the CBI started raiding officers and ministers of Akhilesh Yadav's cabinet when he was the chief minister. I stand with Akhilesh Yadav. The BJP must know that their efforts can't sabotage this gathbandhan. The more they try to halt it, the more strength it will gain," she added.

About two decades ago, the Samajwadi Party and Bahujan Samaj Party had a bitter fall out after their shaky coalition government in Uttar Pradesh came crashing down.

While the foremost agenda of the alliance is to stop the BJP, the BSP chief said they haven't come together only to win the polls, but to also represent the interests of the common people and Dalits, Muslims and other religious minorities.

Last year, the two parties had decided to team up for important bypolls that were prestige battles for the ruling BJP and found that together, they can be unbeaten.

After a successful dry run in three seats, including Yogi Adityanath's Gorakhpur, the two parties decided to take their collaboration ahead and fight the Lok Sabha polls as a formidable team.