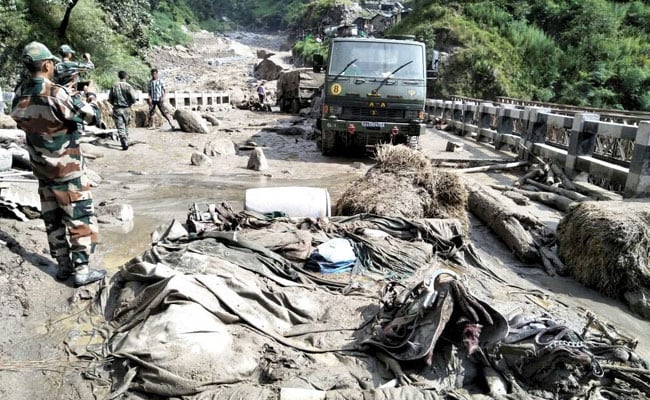 Cloud burst at Pithoragarh district in Uttarakhand on Monday. (PTI)

Dehradun: Six persons died and 10 others, including six Army jawans, were reported to be missing in two incidents of cloudbursts in the Dharchula sub-division of Pithoragarh district in the early hours of Monday.

One of the cloudbursts occurred near Tawaghat at around 2.45 AM, sending a rivulet, the Mangti Nullah, into a spate and its swirling waters swept away a few shops and three Army tents, an official release issued here quoted the Pithoragarh district administration as saying.

Three Army jawans and one JCO escaped with minor injuries in the incident, it added.

The second cloudburst also occurred at around the same time at Malpa and swept away six persons.

"We have pressed the rescue and rehabilitation personnel from the NDRF and SDRF, besides ITBP and Army jawans into service and a massive search operation has been launched to trace the missing," said R S Rana, Disaster Management Officer of Pithoragarh.

Four shops were destroyed in the cloudburst at Malpa, which also left one person injured.

Accompanied by his cabinet colleague Prakash Pant, Rawat undertook an aerial survey of the rain-hit areas and asked the security personnel to launch the rescue operation and evacuate the affected people to safety.

He also asked the disaster management department to prepare an action plan to deal with recurring disasters in the Munsyari and Dharchula areas, where landslides and cloudbursts are common during the monsoon.

The chief minister, however, said there was no need to panic as the administration was "fully alert and prepared to tackle any situation".

Relief-and-rescue operations had been launched on a war footing by the Army, NDRF and SDRF and those living along the banks of rivers and rivulets and other locations prone to landslides were being evacuated to safety, he added. Pant said the road from Malpa to Gal and the Lamadi-Chudi road were badly affected due to landslides.

Promoted
Listen to the latest songs, only on JioSaavn.com
Pilgrims stranded in the Vyas valley were being evacuated to safety in a helicopter, which would remain stationed in the area, he added.

(Except for the headline, this story has not been edited by NDTV staff and is published from a syndicated feed.)
Comments
Pithoragarh cloudburstUttarakhand cloudburst