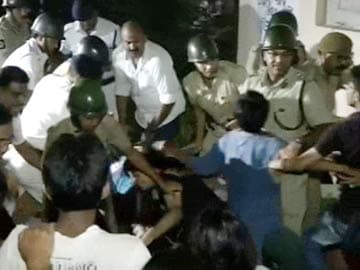 Kolkata: Students of Kolkata's prestigious Jadavpur University have alleged that the police entered a building in the campus at around 2 am on Tuesday night to break up a protest and dragged out students and manhandled them.

35 students were arrested and later released on bail. Many were injured and are in hospital.

"There were policemen, (but) there were goons who were without uniform claiming to be police, who massacred the entire university. Girls like me and everybody like me were hit by male policemen. There were only two policewomen. They didn't touch us. The policemen randomly picked up people," said Anisha Mandal, an undergraduate student.

In protest, students blocked a major crossing in front of the Jadavpur police station for hours till Wednesday morning.

Some students have filed a complaint against police officers for molestation and against the university's Vice Chancellor Abhijit Chakrabarti for calling the police.

Mr Chakrabarti said, "During the rescue operation, some students... alleged students... They were hurling abuses and they tried to hit policemen who were escorting me. This I have seen with my own eyes... I was scared. I was totally afraid of the situation."

The students claim activists of the Trinamool Chhatra Parishad - the ruling party's student's wing - also came in with the police.

Questioning the late night crackdown, the students alleged that one of their friends is on ventilator support and another was partially paralyzed.

"The police came and beat us up brutally. They behaved as if we were pieces of chicken. They caught us and threw us around," said Ronit Mukherjee, one of the protesting students.

Another second year girl, Aromita, added, "There were no women police. We were thrashed by the male police, manhandled and molested."

Promoted
Listen to the latest songs, only on JioSaavn.com
The minister in charge of the police, home minister Mamata Banerjee, has not reacted to the incident. But Firhad Hakim, urban development minister, did and did not give the police a clean chit. "I feel the police should have been more patient," he said.

The students have one demand. The vice chancellor must resign as he had called in the police and got the students beaten up. Till he quits, they will boycott classes. Four Left student unions have called for a strike across colleges in Bengal tomorrow. They will also march to Jadavpur University from Dakshinapan.