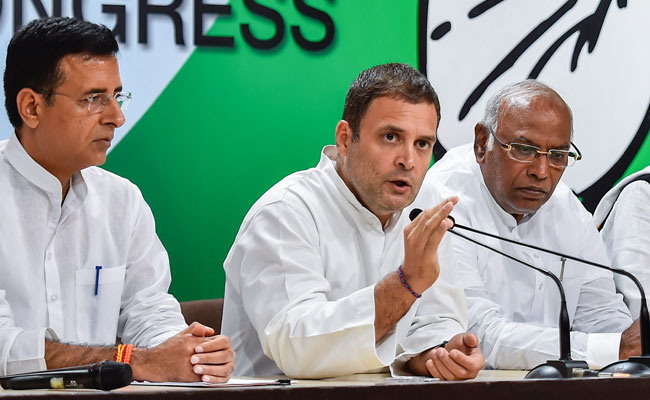 Rahul Gandhi said Sardar Patel had "no tolerance for bigotry or communalism".

Political sparring over Sardar Vallabh Bhai Patel peaked with its inauguration today as Prime Minister Narendra Modi and Congress chief Rahul Gandhi targetted each other over events spread across 50 years. The world's tallest statue, built at a cost of nearly 3000 crores, had drawn much criticism and as PM Modi today decimated critics, the Rashtriya Swayamsevak Sangh, the BJP's ideological mentor, called for cessation of what it called "politics" over the statue.

In the afternoon, Congress chief Rahul Gandhi weighed in, arguing that Sardar Patel -- whom the BJP considers its icon -- was a Congressman with "no tolerance for bigotry or communalism".

Sardar Patel was a patriot, who fought for a independent, united & secular India. A man with a steely will, tempered by compassion, he was a Congressman to the core, who had no tolerance for bigotry or communalism. On his birth anniversary, I salute this great son of India.

A second tweet put the government in the dock.

Ironic that a statue of Sardar Patel is being inaugurated, but every institution he helped build is being smashed. The systematic destruction of India's institutions is nothing short of treason. #StatueOfUnity

The Congress has renewed its accusation of the government destroying institutions since the massive battle within two top officers of the country's premier investigative agency, the Central Bureau of Investigation became public.

The Congress had contended that the battle between CBI chief Alok Verma and his deputy Rakesh Asthana was nothing more than the government's attempt to bury the call for a probe into the French deal for Rafale jetfighters. Sending the CBI chief on forced leave, the party  said, was a violation of the Constitution, the law and the Supreme Court's "clear directions on the subject".

Coming on its heels, the friction between the government and officials of the Reserve Bank of India over autonomy, has provided the Congress with fresh ammunition.

Yesterday, Mr Gandhi tweeted, "Nice that Mr Patel is finally defending the #RBI from Mr 56. Better late then never. India will never allow the BJP/ RSS to capture our institutions."

Today, after reports that the government would use Section 7 of the RBI Act -- a never-before-used rule that allows the centre to give instructions to the central bank's chief -- the Congress questioned what "over-riding emergeny" pushed the government to take such a step.

In the morning, PM Modi, in a veiled attack on Congress chief Rahul Gandhi said, had Sardar Patel not worked for unity", "shiv bhakts" wouldn't have been able to pray at the Somnath Temple today.

"Imagine for a moment that if Sardar Patel had not worked towards uniting the nation, Indians would have to get a visa to see the Gir lions and tigers...and shiv bhakts would need a visa to do puja at the Somnath temple," the Prime Minister said his address after the Republic-Day style inauguration.