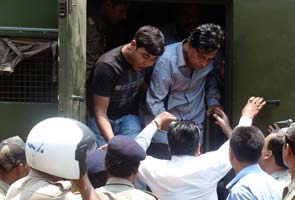 New Delhi / Kolkata: Before he was arrested from a hotel in Kashmir, Sudipta Sen, head of the Saradha Group, sent a letter to the CBI in which he listed 22 people who he accuses of blackmailing or "using" him to make money.

The Trinamool has denied links to the controversial entrepreneur, but has quickly moved to indict Mrs Chidambaram.  On the party website, it does not name her, but asks," Why was a Chennai lady lawyer fixing deals in the Saradha scam? Congress minister must explain."

In his 18-page note to the CBI, Mr Sen says he was forced to strike a series of business deals that were tilted heavily in favour of politicians. One of these deals for a TV channel in Guwahati, he says, was mediated by Mrs Chidambaram. The proposal for a 42-crore investment, he says, came from Manoranjana Singh, who was once married to Congress politician Matang Singh.

Mr Sen says that Mrs Chidambaram was paid over a crore as her legal fee.

He says that though Mrs Singh spoke of how Mr Chidambaram's "great clout" could be beneficial to him, Mrs Chidambaram "never assured me like this."

Sources close to Mrs Chidambaram say that she represented Mrs Singh in other cases, and therefore was asked to offer her professional advice in her negotiations with Mr Sen. Sources also say that Mrs Chidambaram advised her client against the 42 crore investment by Saradha group  after reviewing his companies'  financial track record.  Her fee, they argue, was shared by both parties, as is standard practice, and was not exorbitant for a lawyer of her seniority.

Promoted
Listen to the latest songs, only on JioSaavn.com
On its website, the Trinamool Congress alleges, "A lady lawyer, wife of a powerful minister, allegedly charged Rs 1 crore to draft an agreement other lawyers could have done for a much smaller sum. Why was she paid such a generous fee? What was the quid pro quo?"