Bihar Polls 2020: Chirag Paswan has supported all the contentious issues like Triple Talaq, the scrapping of Article 370 and the construction of Ram Mandir -- every spot where Nitish Kumar deviated from the BJP line. 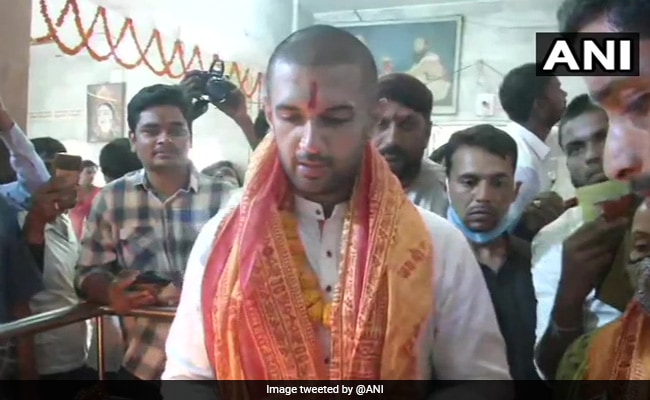 Six years after his debut in politics, quitting a career in films that failed to take off, 37-year-old Chirag Paswan is becoming the mascot of right-wing politics in Bihar. Ditching the secular credentials of his father Ramvilas Paswan, a leader tempered in the JP movement of the '70s, Chirag Paswan has supported all the contentious issues like Triple Talaq, the scrapping of Article 370 and the construction of Ram Mandir -- every spot where Nitish Kumar deviated from the BJP line.

He is currently leading a move to build a grand temple at Sitamarhi, believed to be the birthplace of for Goddess Sita. By declaring that both Ram and Sita are incomplete without each other, he has made a direct connect with the Ayodhya temple movement, a signature campaign for the BJP and right wing groups.

The new Mr Right of Bihar Politics is a BJP ally in Delhi. But in his home state, he is contesting alone -- his plan is to throw out Nitish Kumar and ensure a BJP name as his replacement. Nitish Kumar, who initially wanted to offload him, has succeeded but little did he realise that the BJP was not on board with the idea.

For the BJP, Chirag Paswan is expected to be the driving force to create a receptive audience in Bihar which has so far been secular -- the way Yogi Adityanath brought about a change in Uttar Pradesh. The BJP has also realized that by investing in Chirag Paswan, they can also reach out to a wider constituency among the Dalits.

The possible gains for the BJP -- both short and long term -- have fed the speculation that the party is backing him. Though the party has talked tough about anyone not supporting Nitish Kumar's leadership is out of the NDA in Bihar, it has yet to take any action against Chirag Paswan, adding force to the argument.

There are also signs that the BJP is distancing itself from Nitish Kumar, who, the party feedback says, is losing support over his alleged lack of support to migrant labourers during the Covid-induced lockdown and the subsequent unemployment.

On his part, Chirag Paswan has pledged eternal loyalty to Prime Minister Narendra Modi. In a dramatic Hanuman metaphor, he has said that the image of PM Modi is seared in his heart and will be visible to anyone if, like Lord Hanuman, he slashes open his chest.

Chirag Paswan had carefully prepared himself for the move -- pitching himself as a "Yuva Bihari" (Young Bihari") and raising the issue of Bihari pride at every step.

Over the last few months, he has also managed to stay in the headlines with his constant attacks on the policies and the performance of the Nitish Kumar government.

The sharpness of his criticism and his choice of issues, more often than not, placed him alongside the state's opposition. Even in the case involving the death of actor Sushant Singh Rajput, he has been vocal, exhorting the Chief Minister to seek an inquiry by the Central Bureau of Investigation.

He has also kept up the pressure on the Nitish Kumar government with his criticism of corruption at local levels and the prohibition. The issues had consistently figured in his campaign.

A second-generation politician, Chirag Paswan had initially tried his luck in Bollywood, in a parallel to Rashtriya Janata Dal leader Lalu Yadav's son Tej Pratap Yadav. He made played the lead role in a film "Miley Naa Miley Hum" in 2011, which however, tanked at the box office.

He had entered politics in 2014, contesting elections from Jamui and won amid an overwhelming support for Prime Minister Narendra Modi. He also owns a non-profit, Chirag Foundation.