Chinese ambassador to India Sun Weidong said he was touched by "by the spirit of peace, harmony and devotion." 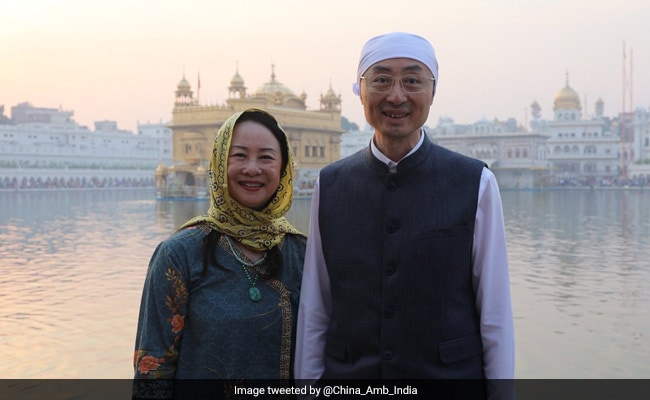 Chinese ambassador to India Sun Weidong with his wife at Golden Temple.

Chinese ambassador to India Sun Weidong and his wife paid obeisance at the Golden Temple on the occasion of the 550th birth anniversary of Guru Nanak Dev.

During the visit, Mr Weidong and his wife joined devotees in preparing ''langar''. He was honoured with a ''siropa'' (saffron scarf) and was presented a portrait of the Golden Temple.

"It is such a pleasure for me to come to Amritsar and visit the holy Golden temple. This is the first time I have come here and I was deeply impressed and touched by the spirit of peace, harmony and devotion. This reflects a great culture and civilisation," Mr Weidong told news agency ANI

He said that India and China have been both powerful ancient civilisations and both countries have had a tradition of learning from each other.

"We must carry on such a tradition. In the 21st century, both countries should learn from each other and make their own contributions to world peace, progress, prosperity and stability to make different civilisations colourful and also make a better future of this world," he added.

The 550th birth anniversary of Guru Nanak Dev is being celebrated with much joy and fervour throughout the country and different parts of the world.

The day is celebrated on the full moon day of the Kartik month as per the Hindu calendar. It is also marked as Kartik Poornima.