The eight-member Chinese delegation met Sonia Gandhi and her son, Rahul, at their 10 Janpath residence as part of an exchange between the Communist Party of China and the Congress. 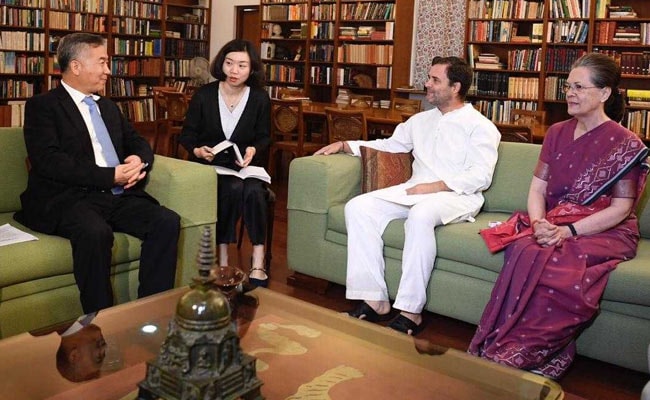 The Chinese delegation met the Gandhis as part of a "party to party" exchange.

A Chinese delegation headed by a Communist Party politburo member met External Affairs Minister S Jaishankar to discuss bilateral and economic ties between India and China on Thursday. They later paid a visit to the top Congress leadership for a party-specific exchange.

Guangdong, which borders the former British colony of Hong Kong, is one of China's most economically significant provinces.

The eight-member Chinese delegation then went on to meet UPA chairperson Sonia Gandhi and her son, Congress president Rahul Gandhi, at their 10 Janpath residence. They were received by senior Congress leader Anand Sharma, who later told reporters that the meeting was part of "party to party" exchange between the Communist Party of China and the Congress.

"We exchanged views on the relations between our two countries, which the Congress deeply values and supports. China also recognises the contribution and the historic role of the Congress in promoting understanding to build that relationship," Anand Sharma said.

Mr Jaishankar, who has served as the Indian ambassador to China, was named as the External Affairs Minister in Prime Minister Narendra Modi's new cabinet last week. The 64-year-old former diplomat is expected to use his past expertise in this regard to improve relations with Beijing, which were badly hit after the Doklam stand-off in 2017. He had played a key role in the negotiations held to resolve that situation, as he did with the incursion into Ladakh's Depsang in 2013.

He is likely to be elected to the Rajya Sabha from Gujarat.