China, Yes. Pakistan, No. Who's Present As Indian Navy Shows Off Strength. 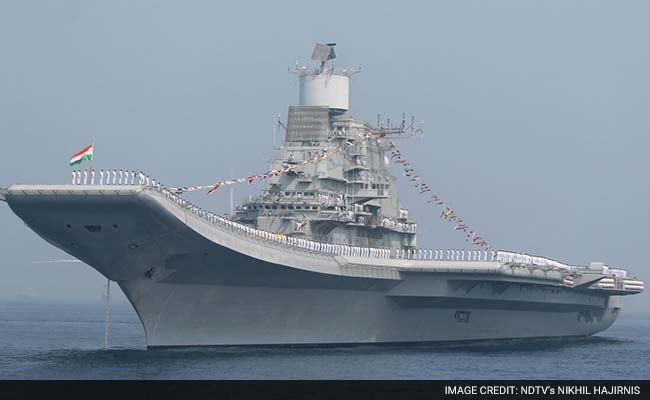 Visakhapatnam: The sleepy and sunny waters of the Bay of Bengal have come alive with the overhead roar of Advanced Jet Trainers (HAWK AJT) piercing their way through the clear blue skies. Right in front of us we spot an LCVP (Landing Craft, Vehicles and Personnel) racing towards the shore in a preparation for a final "assault" - an ops demonstration Prime Minister Narendra Modi will witness this weekend.

In the near distance is the INS Vikramaditya, often called the Pride of the Navy. The 45,400 tonne carrier, formerly known as Admiral Gorshkov, is India's largest naval ship and was inducted in 2013. It's here in full glory, operationally deployed with the MiG-29K/KUB fighter jets that fly off its deck.

Right behind it is the Navy's second aircraft carrier, the INS Viraat. This is almost certainly its last voyage - it is due to be decommissioned later this year. 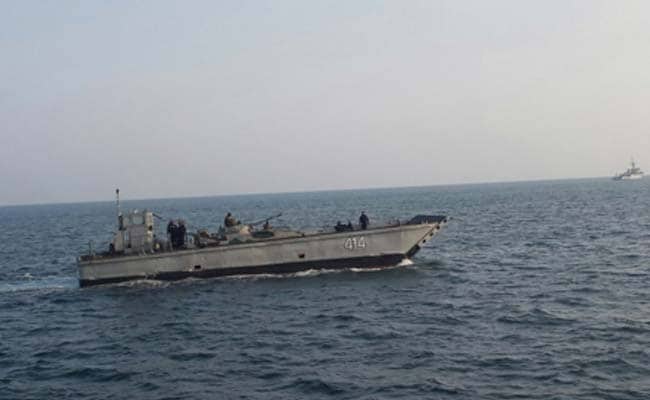 LVCPs rehearsing the final 'assault' on the beach.

We are out at sea on a tug boat off the coast of Visakhapatnam to observe the rehearsals for the International Fleet Review (IFR). This is only the second time in India's history that a global review is taking place. Over four days, the meet will bring together 50 countries, 100 ships, 24 foreign warships and 4,000 sailors from across the world. Meant to showcase the prowess and preparedness of the Indian Navy, the absence and presence of certain countries at the event tells its own story.

Pakistan is not present, but for the very first time, China is. China's investment in the Gwadar Port in Pakistan's Balochistan Province, the Hambantota port in Sri Lanka and the Sonadia deepwater port in Bangaldesh is seen by analysts as a clear attempt to try and expand its influence in South Asia against Indian domination. So its presence here is seen as especially significant as India shows off just what it's capable of.

We spoke exclusively to India's Chief of Naval Staff Admiral RK Dhowan about the significance of the International Fleet review and how he sees China's bids for a growing influence in the Indian Ocean. 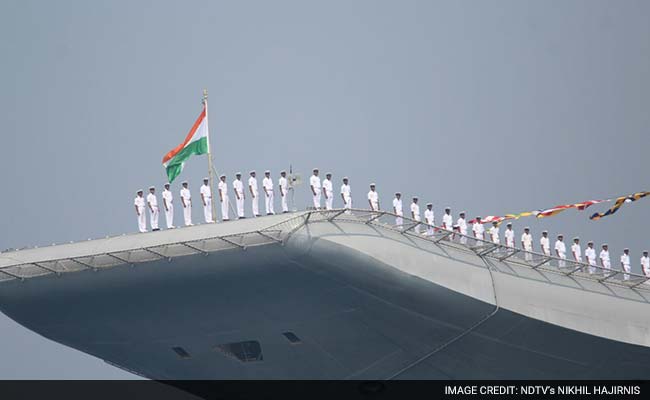 The rehearsals for the International Fleet Review on board the INS Vikramaditya.

NDTV: So for those who are not familiar with the Navy, who don't come from a military background, the provenance for the International Fleet Review is British, it was for the Queen, the King or the Monarch to review her or his Naval Fleet. In the Indian context, what is the significance of what we're about to witness, and why is it only the second time that we are seeing the International Fleet Review?

Naval Chief: Well, as you said, it is an old maritime tradition to have fleet reviews and this is the 11th Fleet Review, the first one being in 1953. We have a Fleet Review where the Honorable President of India reviews the fleet once during his or her tenure, and the first one was reviewed in 1953. As you've said this is the second International Fleet review, the first one was in 2001 in Mumbai, where we had 29 Navies participating and this time it is the International Fleet review of the eastern seaboard in the city of destiny, Visakhapatnam, where 50 countries from the world over have got together to strengthen bridges of friendship. 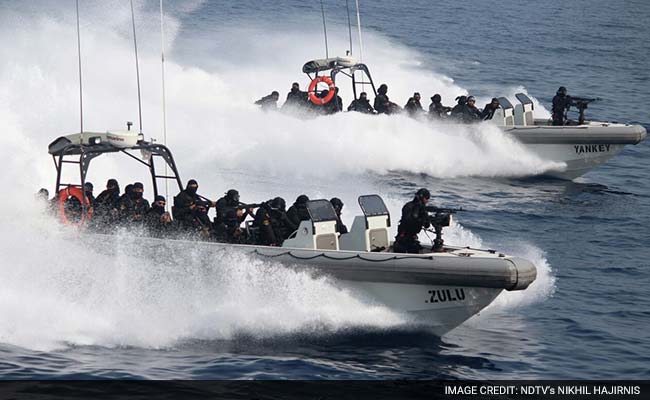 Naval Chief: Well, as I said this is a review where a large number of navies from across the world are participating. We have the participation either by the Chief (there are about 22 Chiefs), we have about 26 heads of delegation, 24 warships from other Navies are participating, and the number of countries represented are about 50, and the total number of ships which will be there for a number of activities during the review will be about a 100, with 71 ships of the Indian Navy, 24 foreign warships and we will have the Coast Guard, the Merchant Navy and the Survey Vessels also present there. Because this is an indication of our maritime capability that our nation has. India is a maritime nation with a direct relationship to the Seas and one of the ways in which we display our maritime capabilities to the Supreme Commander of the Armed forces, which is the Honorable President, is by the Fleet Review. Yes, we have many countries present here, and some of them are not present, Pakistan is not present, China is participating, and China is one of the countries sending its ships as well as its delegation.

NDTV: I want to talk about China in just a moment but would it be fair to say that Pakistan is the only nation which was invited but chose not to be a part of this?

Naval Chief: The aspect is that this is the inputs that we get from our missions and it was based on that, that Pakistan did not participate. The landing and assault boats of the Indian Navy

NDTV: Talk a little bit about China. I find it absolutely fascinating, the Chinese presence here, and I think it would be fair to say that in the previous International Fleet Review, China was not present? So for the first time, we are seeing China here, and the reason it's fascinating is (that) there is an impression that the fight in the waters today in the Indian Ocean is between India and China for the domination of these waters. So to see China here is interesting. How do we read this presence from a geo-political and strategic point of view?

Naval Chief: Well, I would like to change that perception a little bit. I would like to say that the seas around us are gaining newfound importance as each day goes by, and there is no doubt that the current century is the century of the Seas. The seas that you see out there, these are called the Global Commons, and the Global Commons mean that the trade from one ocean flows into the other; and it is actually quite different from the environment that you have on land or the air because out at sea, when you have warships from another Navy participating, they are all operating on international waters. If an officer on the watch was to report to the captain of a ship that we have a warship from another navy on the starboard bow, he would tell him, "Son, flash to him 'Good Morning' because he is in international waters and so are you". The fact is that these are internationally operated, and the aspect related to the safety, stability and security of the Global Commons as we call them is a collective responsibility of the coastal states, because no single navy, however robust it may be, can ensure the security of Global Commons on its own. So the medium of the sea actually lends itself to cooperation, lends itself for a collaborative approach and that is what all aspects of Naval cooperation are about. And as we have seen in our waters, the Indian Navy has actually had a maritime cooperation road map for the next 10 years, with all the countries in the Indian Ocean region, and this is in keeping with the vision of our Hon. Prime Minister which is "Sagar" - which is security and growth for all in the region. So what you see, when you see look at all the ships out there, its about cooperation, it is how to interact with each other and how to work together to make the global commons safe and secure. INSV Mhadei's six-women crew set to circumnavigate the globe in 2017.

NDTV: I will come to the PM's Look East policy and his renewed emphasis on the navy in a moment, but, sir, I understand that you have to give me the politically correct answer on playing host to the Chinese but it's my job to be contrarian on this program - so I am going to ask you the awkward question. I understand that international waters are nobody's property, but the fact is that from a strategic point of view, the Chinese investment in the Gwadar port in Pakistan, in a port in Sri Lanka which could be the biggest we see coming up, the conflict in the South China Sea, the battle for dominance of the Indian Ocean - is it not a concern for India? Do we not have to provide a countervailing narrative to dominate these waters? Are we not seeing China today as our main threat in the waters, and not the old enemies like Pakistan?

Naval Chief: Well, China's trade, a large amount of China's trade and China's oil, passes through the Indian Ocean. The Indian Ocean region actually has become the world's center of gravity in the maritime domain because 66% of the world's oil, 50% of the world's container traffic, 33% of the world's cargo traffic passes through these waters. And it's also a fact that 80% of the trade and oil that emanates in the Indian Ocean region is extra-regional in nature. Extra-regional means that it goes out of the Indian Ocean region towards the Pacific and the Atlantic, because if you see the figures for the Pacific and the Atlantic Ocean, they are just about reversed. When 80% of what emanates from here goes outside the region, it means that any impediment in the free-flow of trade or oil in that region would have a detrimental impact, not just on the economy of that region, but on the global economies as well. And therefore, there is so much of interest in the Indian Ocean Region and we have a large number of warships from other navies which operate in the Indian Ocean. China operates its warships since 2008; the first Anti-Piracy force came here in 2008 as part of the anti- piracy patrol they do in the Gulf region.

Now as far as India is concerned,the Indian Navy monitors every movement of every warship and indeed every other- what we call white shipping traffic - in the area to get an adequate maritime domain awareness. So the movement of the Chinese warships and the Chinese submarines are monitored by the Indian Navy. 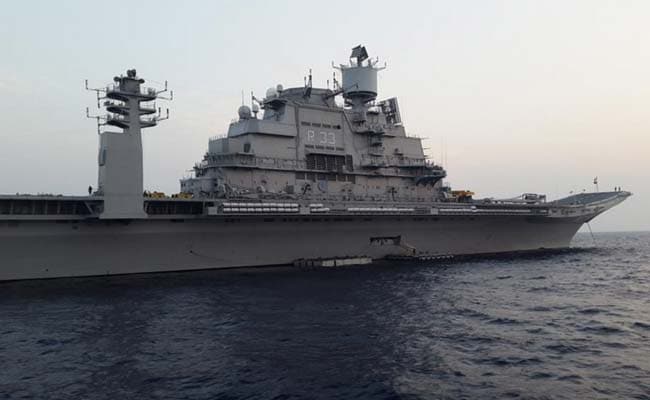 The INS Vikramaditya during the rehearsals.

NDTV: I'm glad you've brought that up because in the media you often see reports of these Chinese submarines moving into Karachi, moving into Sri Lanka, not permanently but transiting through. Is this a point of concern?

Naval Chief: Well, it is an aspect certainly that the Indian Navy monitors to see who is deployed in the region, where they're going, and what they're doing. As indeed we monitor the activities of the other navies as well. And the main purpose is to get a comprehensive maritime domain awareness of our waters. Because we want to know what is going on in the waters around us so that we can adequately protect our maritime interests. And you can be rest assured that the Indian Navy monitors the large ocean spaces very very closely.

NDTV: You know there's a sense that of course China is not an ally and that large parts of the world are fighting a proxy battle with China through India, so there's a suggestion that countries like Japan, countries like Vietnam would like to see a stronger Indian maritime presence to take on China? Do we see our role as that? Do we see China as our biggest competitor in our waters?

Naval Chief: We need a strong Indian Navy, we need a strong maritime force to look after Indian maritime interests which are huge. We have a long coastline of 7615 km, we have an exclusive economic zone of 2 million sq km, we have island territories, 90% of our trade is by sea. So these are all our maritime interests. What the Indian Navy does is work towards shaping a favorable maritime environment in the region.