Children's Day 2021: "We must consider maintaining staff who is trained in child-friendly legal aid and other specialised skills such as psychosocial support," Chief Justice NV Ramana said today at an event. 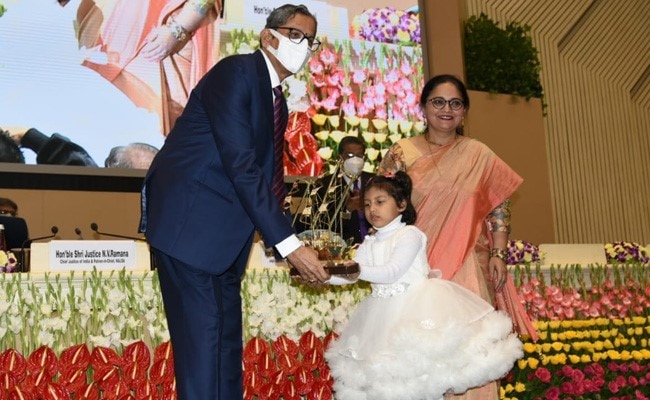 Children who are dragged into the criminal justice system must be helped, Chief Justice NV Ramana said today at an event.

Invoking Pandit Jawaharlal Nehu, the first Prime Minister of India, on his birth anniversary, the Chief Justice said: "Today the birth anniversary of Jawaharlal Nehru is being celebrated all over the country. On Children's Day, it is befitting that we are launching schemes that are primarily targeting the legal aid for children."

"We must consider maintaining staff who is trained in child-friendly legal aid and other specialised skills such as psychosocial support. Children who are dragged into the criminal justice system must be helped," he underlined.

He made these remarks at at the Valedictory Ceremony of 'Pan-India Legal Awareness & Outreach Campaign' that was attended by other senior judges of the Supreme Court and Smriti Irani, Women and Child Welfare Minister.

Earlier, Union Minister Smriti Irani, during her speech, had spoken about schemes "which recognise how difficult it is for a child who undergoes trauma, to engage and receive justice".

She said that various initiatives are being taken to offer legal aid and counselling to children who are victims of abuse. "Methodologies and skill sets have been developed that illustrated abuse narratives from a child without further traumatising the child," she underlined.

She also addressed the judges and said, "I desire a just future for women and children and that just future can be enabled by your help."

Chief Justice Ramana also quoted Jawaharlal Nehru while talking about the need to help the poor.

"Sadly Independent India inherited a deeply fragmented society from its colonial past. Considering the same Pandit Nehru once said, 'There could be no real freedom without economic freedom, and that to call a starving man free is but to mock him' . The stark divide between haves and have-nots is still a reality."

"Despite being part of a welfare state benefits are not trickling down to the intended beneficiaries. People's aspirations about leading a dignified life are often met with challenges. One of them, primarily being poverty.This is where initiatives like legal aid assume great importance," he added.

Two Flights To India Were On Runway Together. How Hundreds Were Saved