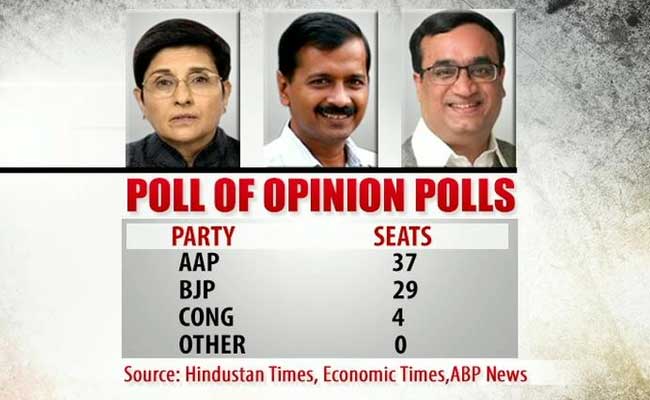 Arvind Kejriwal's Aam Admi Party will get 37 seats in the Delhi election -two more than the half-way mark -according to  an  aggregate of three major opinion polls.

The BJP and allies will place second with 29 seats, three down from the last election in December 2013,  and the Congress will get just four seats.

The NDTV poll of opinion polls is based on  those conducted by The Hindustan Times, Economic Times  and ABP News.

Delhi votes on  Saturday; results will be counted on the 10th.

Mr Kejriwal is running against the BJP's Kiran Bedi for Chief Minister of Delhi.  In the last election, the BJP fell short of a majority; AAP then formed a minority government with support from the Congress.

But  just 49 days into his term, Mr Kejriwal quit, a decision that he has repeatedly said he deeply regrets.  His resignation came after an anti-graft proposal he had championed was stalled by other parties, including the Congress, in the state legislature.

Promoted
Listen to the latest songs, only on JioSaavn.com
Delhi was then governed for several months by the centre via President's Rule. In November, the assembly was dissolved, paving the way for new elections.

The BJP has been counting for the battle in Delhi on the "Modi wave"- the popularity of the Prime Minister that delivered the party to power in states like Maharashtra and Haryana.  But the decision to induct former police officer Kiran Bedi and nominate her as its presumptive Chief Minister has caused a deep rift within the Delhi branch of the BJP.  Worried by the dissent and the lukewarm reception for Ms Bedi at some rallies, BJP chief Amit Shah has been closely supervising the party's strategy for Delhi, with close assistance from Finance Minister Arun Jaitley.