Chief Justice of India NV Ramana said there was once a time when although it was very easy to obtain a law degree it was extremely challenging to have a livelihood out of the same. 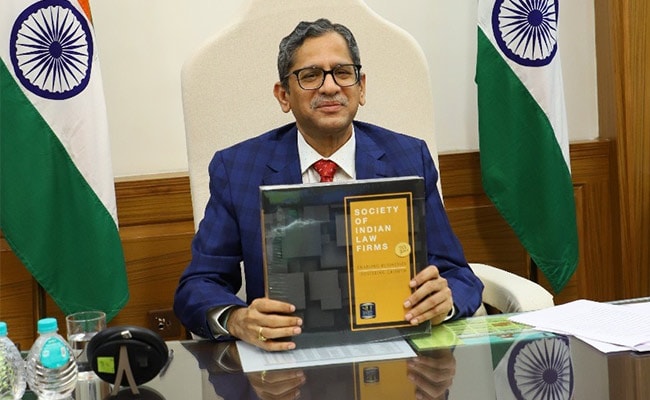 Chief Justice of India NV Ramana today spoke about the inequalities in the legal profession while addressing an event organised by the Society of Indian Law Firms (SILF). He was the chief guest at the release of a coffee table book published by the SILF.

Justice Ramana said, "I remember there was once a time when although it was very easy to obtain a law degree it was extremely challenging to have a livelihood out of the same. During my graduation, people used to ask, 'Why are you studying law? Did you not get any employment elsewhere? Do you not want to get married?'"

"For a first-generation lawyer, a sustainable practice in the courts was a dream which was rarely realised. Therefore, it was often considered as a degree of last resort. Speaking from personal experience, due to lack of resources, most of us learnt while practicing," he said.

Justice Ramana was born to a family of farmers at Ponnavaram village in Andhra Pradesh's Krishna district. He was a student leader, a journalist and a lawyer before his stint as a judge. His tenure as CJI will last until August 25, 2022.

During the event, Justice Ramana said, "I am not sure if the present-day reality is any different. The truth is that there still exists inequity in opportunities for lawyers."

He said the economic liberalisation of India had drastically changed the legal landscape and with the growth in business and investments there was an increasing demand of lawyers with a specialised knowledge in the arena of business and corporate law.

He went on to talk about legal firms and said that today Indian law firms are on the same footing as their global counterparts and many of the firms have established themselves as a one-stop solution for all legal problems.

However, he said, "A significant aspect that Indian law firms need to consider is their community outreach. The prevailing perception is that law firms are only for the service of rich men. There exists misconception among the people, even among lawyers who practice in the courts, that activities of the law firm do not relate to society. The need of the hour is to remove such perceptions."

"Internationally, law firms are taking up several social causes and actively engaging in providing justice to those in need. I urge you all to take up more and more pro-bono cases and reach out to those who are inhibited from reaching us. When it comes to fulfilling our constitutional aspirations, we all must do our bit."

He also said law firms are currently limited to tier-1 cities which is leading to lack of diversity. Tier-2 and tier-3 cities are increasingly becoming hubs of commercial activities and firms should hire the local talent so that young lawyers in smalls towns can also get access to equal opportunities and create a more inclusive environment, he added.

"There are diamonds in the rough everywhere," the Chief Justice said.