Chief Justice NV Ramana was greeted by Punjab Chief Minister Bhagwant Mann upon his arrival at Amritsar on Wednesday and has visited places like Jallianwala Bagh, the Golden Temple in Amritsar, and the Wagah Border. 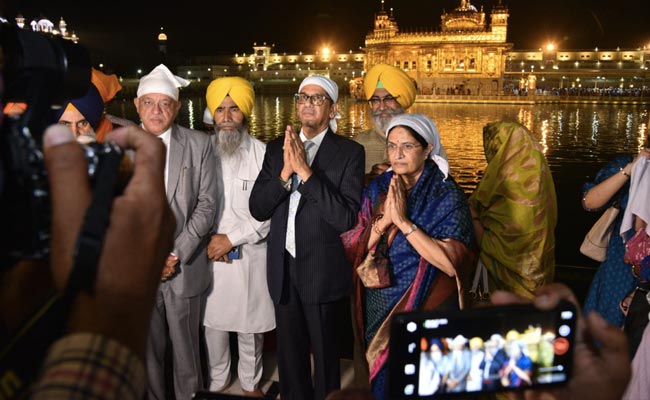 The Jallianwala Bagh massacre is "symbolic of great sacrifices" made in the face of tyranny and serves as a reminder of the heavy price paid for freedom which must be cherished and protected, Chief Justice of India N V Ramana wrote while paying tributes to martyrs on Thursday.

The CJI, who along with his family members are on a Punjab visit, was greeted by Punjab Chief Minister Bhagwant Mann upon his arrival at Amritsar on Wednesday and has visited places like Jallianwala Bagh, the Golden Temple in Amritsar, and the Wagah Border, said a Supreme Court official.

CJI Ramana was offered 'siropa' at the Golden Temple.

Koo App
Chief Minister @BhagwantMann welcomed the Chief Justice of India Justice NV Ramana during his arrival to the holy city of Amritsar. CM said that people of Punjab in general & entire state govt in particular is elated to welcome the CJI & his family during their visit to Punjab.
View attached media content
- CMO Punjab (@CMOPb) 13 Apr 2022

Justice Ramana became the first CJI to visit the Wagah Border, the Border Security Force museum, and zero point to witness the parade of BSF personnel in the beating retreat ceremony.

"Jallianwala Bagh manifests the strength and resilience of the people of this country. This serene garden is symbolic of the great sacrifice made in the face of tyranny. It serves as a reminder of the heavy price paid for freedom, which we must always cherish and protect," the CJI wrote in the visitors' diary on the occasion of the 103rd anniversary of the Jallianwala Bagh massacre.

"My good wishes for Baisakhi. I am very happy today, my lifetime dream came true as my family members and I reached the Golden Temple. I thank the managing committee," Justice Ramana said.

He along with his spouse Sivamala paid floral tributes to Babasaheb Dr. B R Ambedkar at Town Hall, Amritsar on his 132nd birth anniversary on Thursday.