Last week, Bhupesh Baghel asked Rahul Gandhi to divest him of the responsibility of the state Congress president, given that he had his "hands full" with chief ministerial duties. 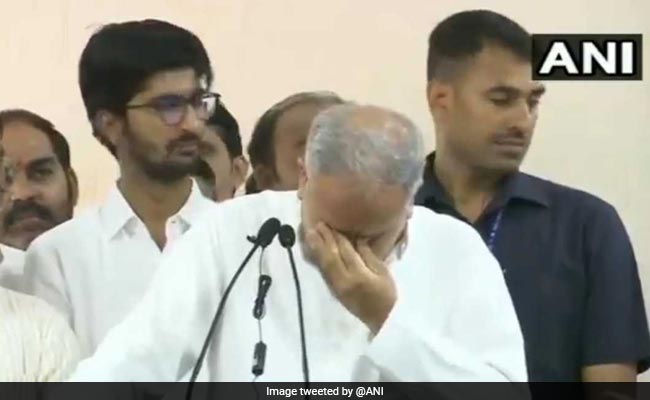 Bhupesh Baghel had been the Chhattisgarh Congress chief since 2014.

Chhattisgarh Chief Minister Bhupesh Baghel had an emotional moment on Saturday when he passed the baton of the state Congress chief to Mohan Markam.

As he gave his farewell speech and thanked Congress workers, Mr Baghel's eyes welled up. A video shows the Chief Minister speaking at the podium, and then pausing for a moment before he takes off his spectacles and wipes his tears.

#WATCH Chhattisgarh Chief Minister Bhupesh Baghel who was also the Congress President of the party's state unit, tears up remembering the contribution of members, at an event passing the post to Mohan Markam in Raipur. (June 29) pic.twitter.com/O70Uuchu8P

"I was appointed to the post by Rahul Gandhiji after we lost the election in 2013. 2014 Lok Sabha elections were near. We were worried about the party's prospects in the state after the 2014 election. The fight we party leaders started after June 2014 continued till the time we came to power in Chhattisgarh," Mr Baghel said.

Bhupesh Baghel, 57, was replaced by Mohan Markham as the head of the Congress's Chhattisgarh unit on Saturday. Senior Congress leader PL Punia and Mr Markam too were present at the event in state capital Raipur.

The move of replacing Mr Baghel comes at a time when the Congress is still coming to terms with its disastrous showing in the Lok Sabha election, following which party president Rahul Gandhi announced his decision to resign from the top post.

The Congress could win only two Lok Sabha seats in Chhattisgarh, despite pulling off an emphatic win against the BJP in the assembly election held late last year.

Mr Baghel became Chief Minister in December after leading the Congress to victory in the state election, ousting Raman Singh's 15-year BJP government in the state. The Congress won 68 of the state's 90 seats.

Bhupesh Baghel, who had taken charge of the state Congress in 2014, is credited with rebuilding the party after most of the state leadership was wiped out in a Maoist attack in May 2013.

Last week, Mr Baghel asked Rahul Gandhi to divest him of the responsibility of the state Congress president, given that he had his "hands full" with chief ministerial duties. He was asked to continue in the post till his replacement was announced.