"Did You Brief Him?": Chandrababu Naidu's Barb At KCR Over PM Modi Meet

Andhra Pradesh Chief Minister N Chandrababu Naidu on Wednesday took a sharp jibe at Telangana Rashtra Samithi chief K Chandrashekar Rao or KCR -- who has proposed a non-BJP, non-Congress alliance -- over his meeting with Prime Minister Narendra Modi. Mr Naidu, who himself is at the forefront of talks for an alliance of regional parties with the Congress to take on the BJP, asked if the meeting was to brief PM Modi on KCR's so-called federal front.

Referring to the Telangana Chief Minister's meeting with regional leaders for his proposed front, Mr Naidu accused KCR of double-speak, saying he met PM Modi barely days after meeting various leaders who are opposed to the BJP's policies.

"Are you meeting Modi to discuss the state's issues or to brief him (on the proposed front)?" the TDP leader asked KCR.

KCR met PM Modi and discussed a variety of issues, including release of funds for 10 backward districts, setting up of a separate high court for Telangana, Kendriya Vidyalayas in new district and an IIIT in Karimnagar district.

KCR had been mooting the idea of a federal front for some time now. He had met West Bengal Chief Minister Mamata Banerjee earlier this year. However, he intensified his efforts after leading his party to a thumping win in Telangana earlier this month. He is currently on a religious yatra to various states, where he is meeting major regional players to drum up support for his idea of a federal front. In the last few days, he met Mamata Banerjee and Odisha Chief Minister Naveen Patnaik. 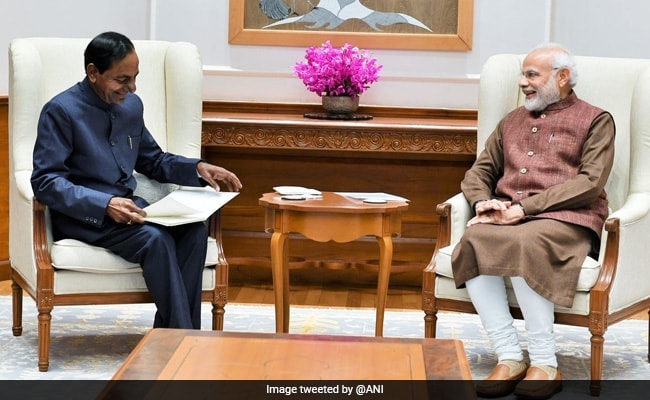 KCR also wants Dalit leader Mayawati and her rival Akhilesh Yadav on board. He is expected to meet Uttar Pradesh leaders soon. While Akhilesh Yadav said in Lucknow that he would meet Mr Rao after January 6 in Hyderabad, Mayawati has not yet given time to the Telangana Chief Minister.

N Chandrababu Naidu is talking with regional parties for a pan-India Mahagathbandhan, a proposed anti-BJP alliance, which includes the Congress. He said there only two fronts -- one led by the BJP, the other led by the Congress.

While on the surface, the opposition has shown unity on many occasion, the main constituents have shown ambivalence in the recent past over the contentious issue of who the prime ministerial face for the alliance would be.

Earlier this month, when DMK president MK Stalin proposed Congress chief Rahul Gandhi's name for the prime ministerial face, almost all the regional parties differed with his suggestion, saying the decision would be taken by the constituents of the alliance after the 2019 polls.