Sharing an image of the scheme on Koo, the Press Information Bureau (PIB) Fact Check account clarified that it was a fake scheme and the government has no connection with it. 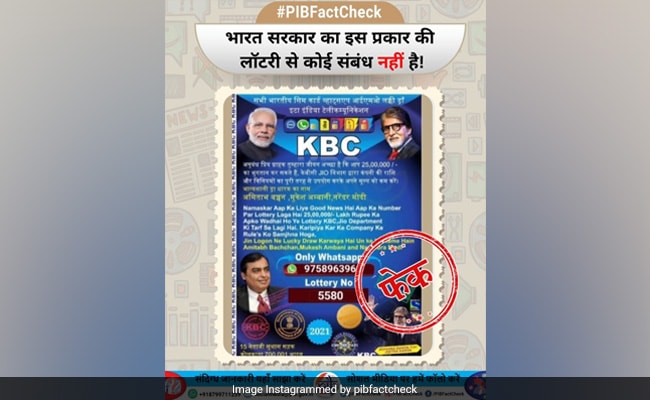 The PIB said the scamsters try to dupe people through phone calls, emails, and text messages.

The government has warned people against a lottery scam that promises to reward “winners” with Rs 25 lakh. Sharing an image of the scheme on Koo, the Press Information Bureau (PIB)  Fact Check account clarified that it was a fake scheme and the government has no connection with it.

The fake scheme claims that the receiver of the message won a lottery of Rs 25 lakh, jointly organised by Kaun Banega Crorepati (KBC) and Reliance Jio Infocomm.

The PIB also provided a link to Delhi Police's Cyber Cell in its Instagram handle that offered more details about the “KBC Lottery Frauds” and asked people to follow some precautions when dealing with such claims.

It said fraudsters contact targets usually through WhatsApp and ask them to pay a certain refundable amount for the processing of the lottery and GST purposes. The Delhi Police Cyber Cell warned people to take a closer look at such messages as these are often drafted poorly with grammatical errors. The police asked people to discuss with family members if they receive such a message.

Also, in any genuine lottery or prize, the tax component and other charges are cut from the prize money and the winner gets the deducted amount. If the caller insists on secrecy, it is a glaring sign that something is fishy about the whole thing.

KBC is a popular quiz game broadcast on television on weeknights. It rewards players for their knowledge in a diverse set of disciplines.