Celebrations At Droupadi Murmu's House As She Gains Lead For President

Residents of Ms Murmu's hometown have got 20,000 sweets prepared to celebrate her victory. 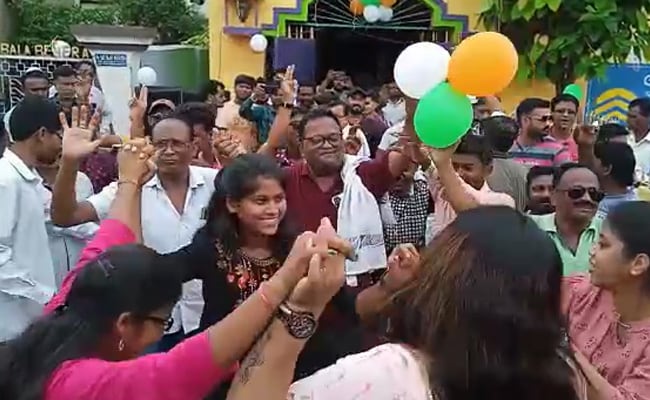 A tribal dance and victory procession are part of the plan after the results are out.

Celebrations broke out outside NDA Presidential candidate Droupadi Murmu's two-storey house in Odisha's Rairangpur as trends from the counting of votes placed her comfortable ahead of rival Yashwant Sinha. A group of people were seen dancing outside Ms Murmu's house. Some men held coloured balloons and young girls held hands and danced in circles. The joyous celebrations are expected to continue as counting progresses.

Residents of Ms Murmu's hometown have got 20,000 sweets prepared to celebrate her victory. A tribal dance and victory procession are part of the plan after the results are out.

The counting is being seen as a formality as Ms Murmu -- backed by the ruling NDA and several other parties -- is set to register a huge win to become the country's first tribal President. At 64 years of age, she will also be the youngest President of India.

Votes of MPs were counted first. Of the 748 valid votes, she got 540, while Yashwant Sinha was at 204. Going by a formula based on population and assembly seats, MPs' votes carries a value of 5.2 lakh (about half of the electoral college). Ms Murmu has got 3.8 lakh; Mr Sinha, 1.4 lakh.

Counting began around 1.30 pm at Parliament House. Results are expected around 4 pm. The process began at 11 am, as ballot boxes from all states were opened before starting the count.

NDA's choice of Ms Murmu -- a tribal woman from Odisha and a former Jharkhand Governor -- worked as a move to split the Opposition and bring support from non-aligned parties, such as Naveen Patnaik's Biju Janata Dal and Jaganmohan Reddy's YSR Congress.