The CBI and Enforcement Directorate teams visited Mr Chidambaram's house in Delhi, but the leader didn't show up. Another team visited the house later to paste the notice. 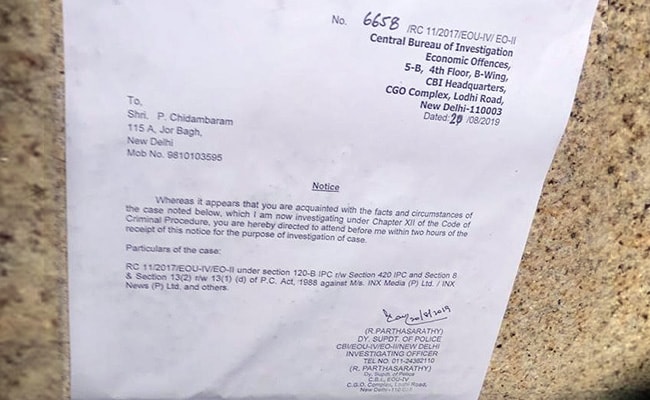 The CBI on Tuesday posted a notice outside Congress leader P Chidambaram's house, ordering him to appear before it "within two hours". The agency was looking for the former Union minister after his anticipatory bail request in the INX Media case was rejected by the Delhi High Court.

The CBI and Enforcement Directorate teams visited Mr Chidambaram's house in Delhi, but the leader didn't show up. Another team visited the house later to paste the notice.

"Whereas it appears that you are acquainted with the facts and circumstances of the case noted below, which I am now investigating under Chapter 12 of the Code of Criminal Procedure, you are hereby directed to attend before me within two hours of the receipt of this notice for the purpose of investigation of the case," the notice read.

Investigators say Mr Chidambaram facilitated a mammoth foreign funding for the television company in 2007, for which his son Karti Chidambaram received kickbacks.

Delhi High Court's Justice Sunil Gaur on Tuesday said "prima facie" Mr Chidambaram was the key conspirator in the case as he rejected his request.

"Facts of the case prima facie reveal that the petitioner is the kingpin, that is, the key conspirator in this case," Justice Gaur said.

Mr Chidambaram's legal team is expected to challenge the High Court's order in the Supreme Court on Wednesday.

The Congress called the action against Mr Chidambaram "vendetta".

"Unrelenting, insidious and vindictive persecution of P Chidambaram and his family is an insult to rule of law as it stands constituted in a Democracy. Those who sow the wind eventually reap the whirlwind. Hubris of ignorance and arrogance is a deadly cocktail. Vendetta never pays," Congress leader Manish Tewari tweeted.