"Can't Even Kiss Her Farewell": 'Kaali' Filmmaker On Grandmother's Death

Leena Manimekalai, who was born in Tamil Nadu's Madurai and is based in Toronto, had shared the poster of her film early last month. 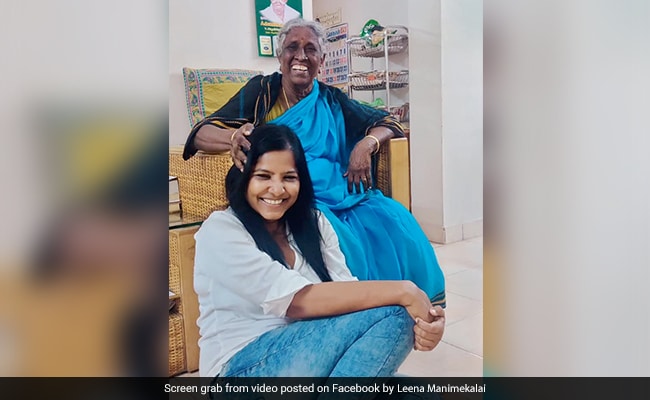 "I don't understand why I am alive when I can't even kiss her a farewell," she said.

Filmmaker Leena Manimekalai, who faces police cases for hurting religious sentiments after a documentary poster last month sparked strong reactions on social media over the way it shows Goddess Kali, today said she couldn't see her grandmother who died recently because she is "stuck" in Canada's Toronto as the Indian government considers her a criminal.

"Avva, my grandmother Rajeswari, stopped breathing. I don't understand why I am alive when I can't even kiss her a farewell. I am stuck in Toronto because I am a "criminal" according to Indian Government that has booked me in nine FIRs and issued a "look out circular" to arrest me in the airport itself - all for a film poster," she wrote in an emotional Facebook post with her picture with her grandmother where they are both smiling.

They took the picture before she left for Canada, Ms Manimekalai said, adding that she had interviewed her for her thesis film titled 'Kaathadi'.

"She had promised to attend my graduation and the premiere of my thesis film. But life proves to be cruel once again," she said.

The filmmaker further said that her late grandmother had three days ago told her mother that she would win all the cases. "She whispered "love you, muah" in my last video call with her. Maybe I am alive to live her wish. I am Kali. My avva is Kali's mother. We can be defeated but not be destroyed," she said.

Leena Manimekalai, who was born in Tamil Nadu's Madurai and is based in Toronto, had shared the poster of her film early last month. The poster shows a woman dressed like Goddess Kali and smoking. A flag of the LGBT community is seen in the background.

"I have nothing to lose. I want to be with a voice that speaks without fear of anything until it is. If the price is my life, I will give it," she had tweeted in response to attacks on social media.

A Delhi court will hear further arguments on August 29 on a plea seeking to ban the documentary for allegedly depicting a Hindu deity in an objectionable manner.