Followers Chanted 'Raavan' As Chandrashekhar Azad Was Bought Before Court

While awaiting the court's orders, Chandrashekhar Azad was seated in the courtroom surrounded by about 15 of his followers. 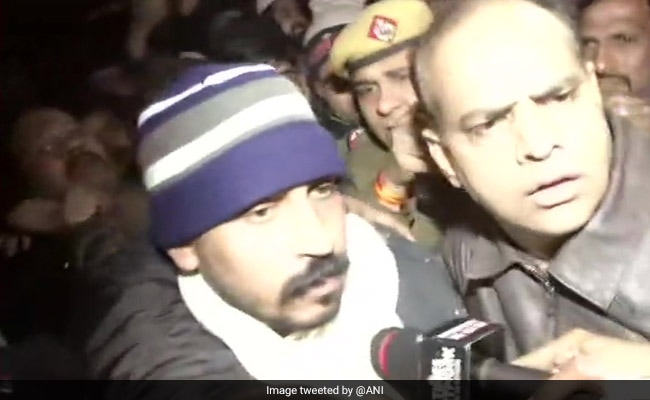 As Bhim Army chief Chandrashekhar Azad entered the court premises on Saturday to be produced before the metropolitan magistrate, his followers chanted his nickname "Raavan".

There was a heated argument of about five minutes between journalists and police officials, before they were allowed to go inside the court. When they entered, they narrated the whole incident to the judge Arjinder Kaur who passed directions that the proceedings will be held in-camera.

The court then reserved the order on Chandrashekhar Azad's judicial remand and bail application, and said it will pronounce the order in a while.

Metropolitan Magistrate Arjinder Kaur dismissed his bail plea, saying, "At this stage, court is of the considered view that substantial grounds for granting bail to the accused are not made out."

Mr Azad who was arrested in connection with the violence in Old Delhi's Daryaganj was sent to 14 days' judicial custody.

While awaiting the court's orders, Mr Azad was seated in the courtroom surrounded by about 15 of his followers.

He told them that the government ''burned'' Assam by implementing the National Register of Citizens (NRC) and they are trying to create an issue of Hindu-Muslim divide by the amended citizenship Act.

"Your property and citizenship would be taken away from you; you won't be able to vote for five years.... They are trying to make create an issue of Hindu-Muslim divide by this citizenship act," he claimed.

Earlier, a lawyer had requested the court to direct the investigating officer to give details of Mr Azad's whereabouts.

On this, the officer said that Mr Azad had been arrested and would be produced before the court within 24 hours as per the provisions of the law.

While Mr Azad was taken away from the court's premises after pronouncement of the order, his followers gathered around him and again chanted "Raavan". He was taken to Tihar jail in a white car by the police.

Mr Azad's outfit had organised a march from Jama Masjid to Jantar Mantar on Friday against the new citizenship law, despite not having permission from police.

The protesters marching towards Jantar Mantar from Jama Masjid were stopped by police and paramilitary personnel near Delhi Gate, after which a car was set on fire. Police resorted to baton-charge and used a water cannon to control the situation.