A truck with LPG cylinders rammed a bus that overturned and caught fire. The fire of the bus spread rapidly to the truck, an ambulance and an oil tanker. 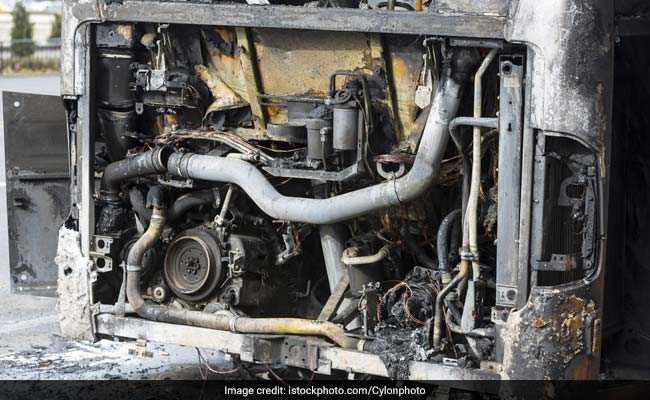 The police have restricted the movement of vehicles in and around the accident spot. (Representational)

At least 26 people were injured in an accident involving four vehicles that also caught fire on NH-33 in Jharkhand's Ramgarh district, police said on Tuesday.

The accident occurred on Monday night at Chutupalu valley when a truck carrying LPG cylinders rammed the rear of a passenger bus that overturned and caught fire. The fire of the bus spread rapidly to the truck, an ambulance and an oil tanker, Sub-Divisional Police Officer ofRamgarh, Radha Prem Kishore said.

The ambulance carrying a body and two people was stuck at the spot there while the tanker had overturned earlier at the same spot.

At least 24 passengers of the bus and the two persons accompany the body in the ambulance suffered burn injuries, he said adding that its driver has been missing.

The ambulance which was on its way to Birni block in Giridih district from the Rajendra Institute of Medical Sciences (RIMS), Ranchi, was reduced to ashes.

The injured bus passengers were taken to a nearby hospital, he said adding that five of the injured were referred to the RIMS while others were discharged. Traffic movement on the national highway between Ranchi and Ramgarh was restricted following the accident. Ramgarh Superintendent of Police A Vijaya Laxmi told PTI that the traffic has been diverted on either side via Patratu and Gola.

"The fire has been brought under control. We have been waiting for the gas to burn out completely. An Indian Oil Corporation team has also reached the spot to help the district authorities," she said.

Traffic movement on the highway is likely to be restored late tonight, the SP said. Meanwhile, the ambulance was carrying the body of Masuddin Ansari, a resident of Giridih district, who had died in the RIMS on Monday evening, the SDPO said. His body was also burnt to ashes along with the ambulance, while his wife and another relative was injured, he said.