Chhattisgarh Assembly Election: This has come as the second jolt to the party over the last one month, after Chhattisgarh Pradesh Congress Committee working president Ram Dayal Uike's decision to join the BJP on October 13 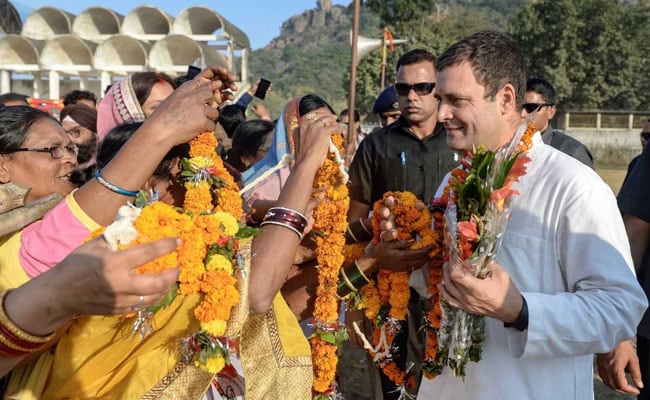 Election in Chhattisgarh: Congress president Rahul Gandhi campaigns ahead of the Chhattisgarh polls.

Chhattisgarh Congress vice-president Ghanaram Sahu resigned from the party on Sunday, dealing it a major blow a day ahead of the first phase of polling in the state.

In his resignation letter, Mr Sahu alleged that he was being "mentally harassed" by state party president Bhupesh Baghel over personal differences. "Although I am a Congress officebearer, I was not given a role to play in various activities organised before the election... I have always been a dedicated member of the party, but everything has a limit. As the state Congress chief has been trying to drive me out of the party for some time now, I have decided to resign as state vice-president and give up its primary membership," the note read, listing out his contributions to the party.

This has come as the second jolt to the party over the last one month, after Chhattisgarh Pradesh Congress Committee working president Ram Dayal Uike's decision to join the BJP on October 13. The resignation of the Pali Tanakhar MLA was dubbed a major loss, given that he was an influential tribal leader in the state. The Congress had appointed Mr Uike to the post of working president in January.

The Congress suffered another setback by failing to form an alliance with the Bahujan Samaj Party (BSP), which decided to partner with Ajit Jogi's Janata Congress Chhattisgarh (J) instead. The Congress rebel predicted a few days ago that he would become the next chief minister of the state while BSP chief Mayawati occupies the Prime Minister's position.

The first phase of the elections will cover 18 seats distributed across eight Maoist-hit districts of the state. While 12 of these are reserved for the scheduled tribes, one has been allotted to the scheduled caste.

The polling for the remaining 72 seats will take place on November 20, and the votes will be counted on December 11. As many as 1,291 candidates are in the fray for the two-phased state polls.