Blast in Submarine Sindhurakshak was Due to Lapses in Procedure, Says Navy 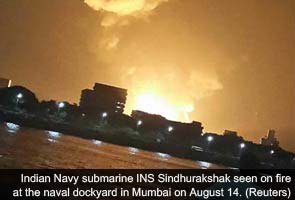 New Delhi: Explosions on board INS Sindhurakshak in August 2013 - which caused the death of 18 sailors and the vessel to sink in Mumbai harbour - happened because critical Standard Operating Procedures, or SoPs, were violated, an internal inquiry into the incident has revealed.

Speaking on condition of anonymity, senior Navy officials aware of findings of the Board of Inquiry said, "Processes were flouted when torpedoes were being loaded on the boat".

Confirming that procedures had indeed been violated, Chief of Naval Staff Admiral Robin Dhowan told NDTV, "Perhaps in not following certain procedures things could have gone wrong that led to accidents".

Submarines are highly complicated platforms and detailed Standard Operating Procedures are there for handling them. "We have found that whenever SOPs are not followed, there is room for error and that could lead to accidents," Admiral Dhowan said.

This is the first time the Indian Navy has officially ascribed a reason to what was perhaps the worst-ever accident in the submarine arm. (Read: Safety rules violation may be behind INS Sindhurakshak accident, says Russia)

The INS Sindhurakshak, a Kilo-class submarine - carried 16 warheads, a combination of Sut Torpedoes and Klub Missiles.

On August 14, the submarine was being prepared for a sortie - a dive at sea -- when a major explosion on board led to its sinking and the death of the sailors. The explosion took place in the forward compartment where the weapons bay was located. (Read: INS Sindhurakshak submarine explodes, 18 sailors feared dead)

Forensic examination of the 14 missiles and torpedoes recovered from the damaged submarine ruled out malfunction of ordnance which could have caused the explosion.

"Of the 16 warheads, two had exploded. The rest disintegrated, but didn't explode. This indicates that the warheads were stable and processes were violated during loading," said an official.

Admiral Dhowan said the incident has spurred the Navy to put in place strict remedial measures -- for instance, "rigid safety audits and examination by operational commands prior to sorties".

Promoted
Listen to the latest songs, only on JioSaavn.com
The Navy has also tested all other torpedoes and tube-launched missiles in other submarines of the same specification and found them to be "stable".

INS Sindhurakshak, the 9th of the 10 Kilo Class diesel-electric powered submarines, was commissioned in December 1997. It went through a mid-life upgrade between June 2010 and May 2013, which cost $80 million.