Manoj Tiwari claimed that there were thermal checks and not more than 40 people on the field. 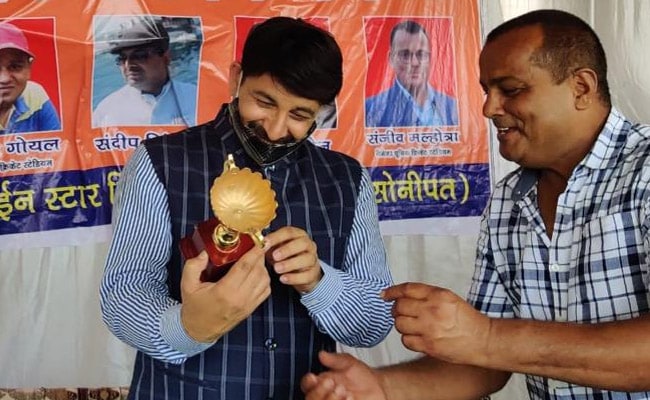 Manoj Tiwari was seen taking photographs without any distancing

BJP MP Manoj Tiwari today denied that he had violated lockdown rules by playing at a cricket academy in Sonipat, Haryana. The government has allowed the reopening of stadiums, he pointed out in a video posted on Twitter, accusing Delhi's ruling Aam Aadmi Party (AAP) of targeting him to hide its own mess.

AAP leader and Rajya Sabha MP Sanjay Singh said it was an "utterly insensitive act" on the part of the Delhi BJP chief to visit another state to play cricket by "violating" COVID-19 lockdown rules.

"The BJP-ruled Khattar government in Haryana is stopping (from visiting Delhi) doctors and nurses who live in the state. The BJP government has closed all roads connecting Delhi and Haryana. But it did not stop Tiwari who went there to play cricket," Mr Singh said, reported PTI.

"Today there is a lot of talk in the media about my cricket match. But I played within the rules. In lockdown4, the home ministry allowed stadiums without spectactors. So I played within rules," said Mr Tiwari, the chief of the BJP in Delhi.

He accused AAP of flinging allegations at him to divert attention from one of its MLAs accused of bribe and named by a doctor who committed suicide.

Clips on Twitter showed Mr Tiwari scoring sixes and fours in what was called a friendly match at an academy in Sheikhpura. "I made 67 runs," declared the actor-turned-politician, who was not in a mask in the visuals.

He was also seen taking photographs without any distancing.

The politician also tweeted a video of the game with the message: "Everyone should be healthy, their immunity should be strong."

He claimed that there were thermal checks and not more than 40 people on the field.

"I have always followed social distancing, lockdown norms. All norms were followed," the MP was quoted as saying by new agency ANI.

Critics also questioned whether Mr Tiwari was right to travel from Delhi to Haryana amid restrictions.

The BJP leader said he had taken permission from the police to travel.