The BJP and Shiv Sena have agreed to go 50-50 on seats for the Maharashtra elections, say sources

After three years of unrestrained attacks on Prime Minister Narendra Modi and the BJP, the Shiv Sena has sealed its alliance with the ruling party for the national election due by May and the Maharashtra polls. The announcement last evening followed yet another meeting between BJP chief Amit Shah and Uddhav Thackeray at the Sena chief's Mumbai home "Matoshree".

What sealed the deal is the first-ever 50-50 seat-sharing between the two parties for the Maharashtra election.

At the joint press conference, Chief Minister Devendra Fadnavis of the BJP said, "We have decided to come together for the Lok Sabha and Vidhan Sabha elections".

Admitting there were "some differences" between them, Mr Fadnavis hinted that the renewal of the alliance was a matter of political compulsion.

"Today, when in the country some people are coming together and trying to challenge us, the feeling of people and country was also that we should come together," said the Chief Minister, seated alongside Amit Shah and Uddhav Thackeray.

The two parties had a similar ideology and had been in alliance at the centre and the state for the last 25 years, he added. The alliance took several meetings and backroom negotiations even as the Sena kept up its public criticism of its long-time ally. 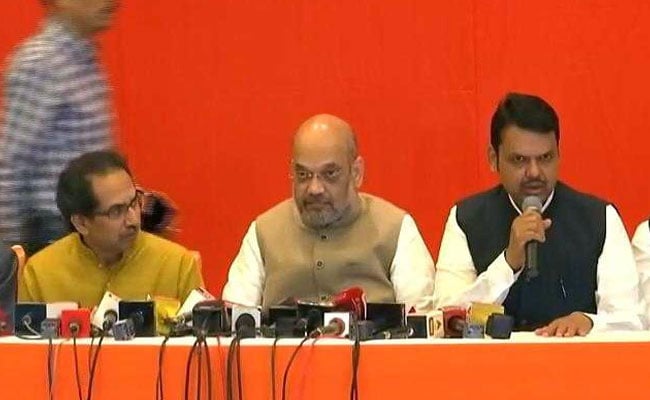 In the last national election of 2014, the BJP contested 26 and the Sena 22 of Maharashtra's 48 seats

"Whatever differences were there, we have decided to end all the bitterness on this table and go ahead."

Our association with the @ShivSena goes beyond politics. We are bound by a desire to see a strong and developed India.

The decision to contest together strengthens the NDA significantly. I am sure our alliance is going to be Maharashtra's first and only choice!

The seat-sharing indicates that the BJP barely managed the position of big brother in Maharashtra - the root of much of the friction. While both parties have agreed to contest equal number of seats for the assembly elections, due later this year, the BJP will contest 25 Lok Sabha seats to the Sena's 23. Mr Shah claimed the alliance will win 45 seats.

In the last national election of 2014, the BJP contested 26 and the Sena 22 of Maharashtra's 48 seats. The state sends the most number of lawmakers to parliament after Uttar Pradesh, which has 80.

Allies for nearly three decades, the relationship between the two parties had soured over seat-sharing for the 2014 state elections, after which the two fought separately. The BJP won 123 of 288 assembly seats and the Sena, 63. The split verdict had forced the two parties to join hands to form government.

Since then, the Sena has not missed a single chance to target the BJP and has virtually been the opposition on most scores. Over the past few months, the comments grew increasingly belligerent as the Sena said it would either be the big brother in the Maharashtra equation or go solo. Last year, the Sena even announced it would fight the 2019 polls alone.

The BJP remained conciliatory and repeatedly reached out to its estranged ally. Last week, Devendra Fadnavis visited Uddhav Thackeray at his home. The Sena had reportedly insisted on the chief ministerial post and wanted the same formula as in 1995, in which it contested 169 of 288 seats while the BJP was given a smaller share, 116. The Sena had then won 73 seats and the BJP, 65.

The Sena has apparently softened its stance on seat-sharing by agreeing to contest fewer seats than the BJP in the Lok Sabha polls. Sources say it is because of opposition consolidation and also the realisation that both stand to lose without each other and could end up ceding ground to the rival NCP-Congress partnership.

Besides, this time, the MNS (Maharashtra Navnirman Sena) of Uddhav Thackeray's cousin Raj Thackeray may be walking across to the anti-BJP front even though the NCP and Congress disagree over including the party.