Medical and Health Minister Srinivas Rao and Endowments Minister Manikyala Rao met the Chief Minister in his chamber in the Assembly and handed the letters of resignation to him. 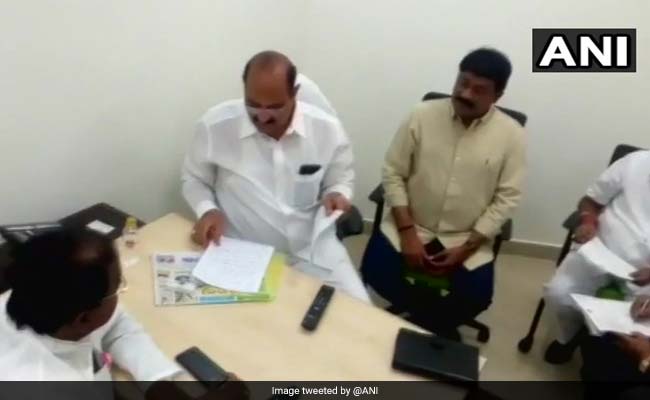 BJP Ministers in Andhra Pradesh cabinet submitted their resignation in the CM office in Amaravati.

Medical and Health Minister Srinivas Rao and Endowments Minister Manikyala Rao met the Chief Minister in his chamber in the Assembly and handed the letters of resignation to him.

They thanked Mr Naidu for the opportunity as the Chief Minister also appreciated their efficient working.

Later, Srinivas Rao said: "I had the privilege of working with him for more than three-and-a-half years. I recently asked him about his opinion on my work. He gave me the certificate that I have no enemies," he said.

Manikyala Rao said he learned to operate a computer because of Mr Naidu's stress on use of technology in the administration.

"Earlier, I knew only making and receiving calls. I was never used to texting. Now, I operate computer because of Naidu's thrust on the use of technology...," he said.

The resignation came ahead of the presentation of the budget for 2018-19 in the Assembly by Finance Minister Y. Ramakrishnudu, a party official said.

Both BJP ministers had stayed away from the cabinet meeting here that was convened to formally approve the budget.

Promoted
Listen to the latest songs, only on JioSaavn.com
Thursday's development comes after the Telugu Desam Party (TDP) on Wednesday announced its decision to pull out of the Narendra Modi government in protest against refusal of the Centre to grant Special Category Status to Andhra Pradesh, saying the Centre has done injustice to the state.