Arjun Munda was scheduled to address a rally of BJP workers in Bishnupur town in Bankura district of southern West Bengal, close to his home state of Jharkhand. 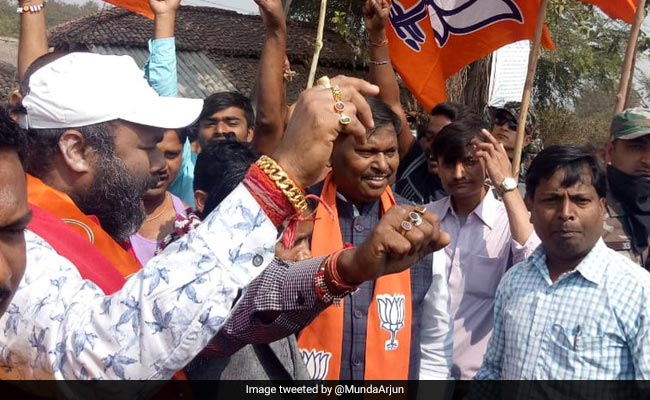 Arjun Munda described the Bengal government''s stand as "autocratic" and "acts of goondaism".

Senior BJP leader Arjun Munda said on Wednesday that he was denied permission by Bishnupur administration in West Bengal to hold a meeting there, amid claims from the saffron party the TMC government was restricting their leaders from addressing political rallies in the state.

Mr Munda was scheduled to address a rally of BJP workers in Bishnupur town in Bankura district of southern West Bengal, close to his home state of Jharkhand.

He said he had to return to Jamshedpur, about 161 km from Bishnupur, without addressing the rally as the district administration "did not give permission to hold it".

"No reason was given (by the administration)," Mr Munda told reporters after his return.

But Bankura Superintendent of Police Koteswara Rao Nalavat said permission was not given for Munda's meeting as adequate security was not available in view of TMC leader Abhishek Banerjee's scheduled meeting at Onda, about 22km from Bankura town, during the day.

A bitter political tussle is raging between the Bharatiya Janata Party and the ruling Trinamool Congress in West Bengal ahead of Lok Sabha polls, expected in April-May.

The BJP has said its leaders, including party president Amit Shah and Uttar Pradesh Chief Minister Yogi Adityanath, have been denied permission to land their choppers in the state.

On Tuesday, Adityanath travelled by road from Jharkhand to enter West Bengal to address a rally in Purulia. A day before, the BJP said Adityanath's rally in Bankura district had to be cancelled as the TMC government was "dilly-dallying" on permitting his chopper to land.

Mr Chouhan travelled by road from Kolkata to Kharagpur to address another scheduled rally.

TMC leaders have termed the charges baseless and asserted the permission may have been withheld by the respective district administration for various reasons, including security.

He described the Bengal government''s stand as "autocratic" and "acts of goondaism".

He said it was "ridiculous" that West Bengal Chief Minister Mamata Banerjee, who had staged a three-day dharna in Kolkata to "protect democracy", was herself violating it.