It is now up to Speaker Sumitra Mahajan to decide whether to take up the notice or not. 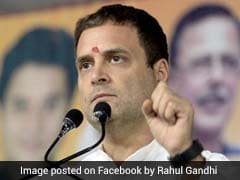 The Bharatiya Janata Party has intensified its attack on Rahul Gandhi. (File)

As the BJP stepped up attack on Rahul Gandhi over the Rafale issue, three members of the ruling party in the Lok Sabha on Monday moved a notice of breach of privilege against the Congress president, alleging that he spoke "falsehood" and "misled the House" over the fighter aircraft deal in his speech during a debate in July.

BJP MPs Anurag Thakur, Nishikant Dubey and Sanjay Jaiswal have sought action against Mr Gandhi over his speech during the debate on the no-confidence motion against the Narendra Modi government in Parliament's Monsoon Session.

The Bharatiya Janata Party (BJP) has intensified its attack on Mr Gandhi following the last week's Supreme Court verdict dismissing petitions seeking a probe into alleged irregularities in the Rafale deal. The top court had said there is no occasion to doubt the decision-making process in the procurement of 36 fighter jets from France.

Mr Gandhi has, however, stuck to his allegations of corruption in the purchase and demanded a probe by a Joint Parliamentary Committee (JPC).

In their notice against the Congress leader, the BJP MPs quoted Gandhi as saying that the UPA government had agreed to buy the aircraft at Rs 520 crore per unit but when the BJP-led NDA government signed the deal, it cost Rs 1,600 crores "by magic".

"The above statement is entirely untrue.... We categorically assert that the price comparison given by Rahul Gandhi is a figment of imagination, incorrect and utter falsehood. It was an attempt to mislead the House," they alleged in their notice.

They also cited the court order and noted that the government had submitted a comparative chart of prices in a sealed cover to it.

It is now up to Speaker Sumitra Mahajan to decide whether to take up the notice or not. If she does take it up, then she may send it to the Privilege Committee for the next course of action.

Senior Citizens Account For 63% Of Coronavirus Deaths In India: Centre