BJP Hits Back At Congress Over Alleged Ballot Tampering Video

Congress leader Harish Rawat shared a video on social media in which a person is seen ticking and signing several postal ballot papers, asking the Election Commission to take cognisance of the issue. 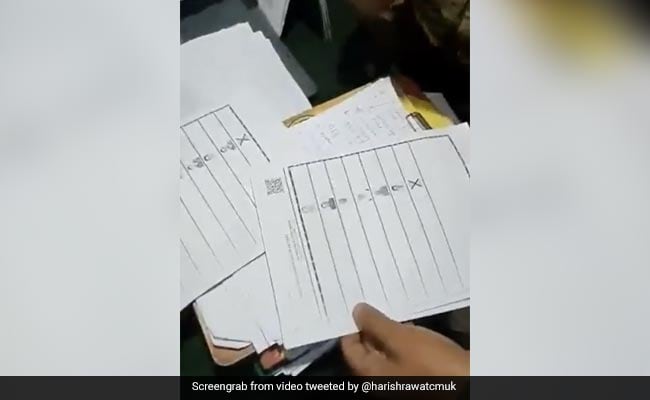 The BJP on Wednesday accused the Congress and Harish Rawat of misleading people by sharing a video on social media in which a person is seen ticking and signing several postal ballot papers and said that the saffron party had already lodged a complaint with the Election Commission regarding the clip.

The Congress knows it is heading for a defeat in the polls and in its search for excuses, the party sometimes questions EVMs and sometimes postal ballot papers, Uttarakhand BJP vice president Devendra Bhasin said.

"The postal ballot related video which Harish Rawat has made viral was brought to the EC's notice by the BJP in Didihat in the past itself," he said.

Accusing Mr Rawat of misleading people, he said, "The Congress leaders should know that a complaint has already been lodged with competent officials of the EC and the authenticity of the video is being probed."

The BJP has always been in favour of a transparent electoral process but the Congress' track record in this regard is tainted, Mr Bhasin said.

BJP candidate from Didihat Bishan Singh Chufal said he got the video a couple of days back and, after seeing it, lodged a complaint with Didihat's returning officer and Pithoragarh District Magistrate requesting them to look into it.

Sharing the video on his Twitter handle and Facebook on Tuesday, Mr Rawat said, "Sharing a short video for everyone's information. It shows how one man at an army centre is ticking and signing several ballot papers. Will the Election Commission take cognisance of this?"

When asked about the tweet, Mr Rawat's spokesman Surendra Kumar refused to disclose the source of the video but claimed that it is from Uttarakhand.

The party has not made a formal complaint to the Election Commission in this regard yet, but it can take suo motu cognisance of it, he said.

Reacting to the tweet, the BJP said it reflects the Congress' frustration while Congress leaders termed it as a "mockery of democracy" and urged the EC to take cognisance of it and act against the guilty.

Leader of Opposition in Uttarakhand Assembly Pritam Singh said, "In this video that makes a mockery of democracy a man at an army centre is seen ticking and signing several postal ballot papers in favour of the party of his choice."

The Election Commission should take cognisance of it and act against the guilty, Mr Singh said.