The accusation comes after Assam Chief Minister Sarbananada Sonowal hinted that the government might think of challenging the Supreme Court's decision of rejecting the central and Assam government's plea for sample re-verification to find out wrongful inclusions of names. 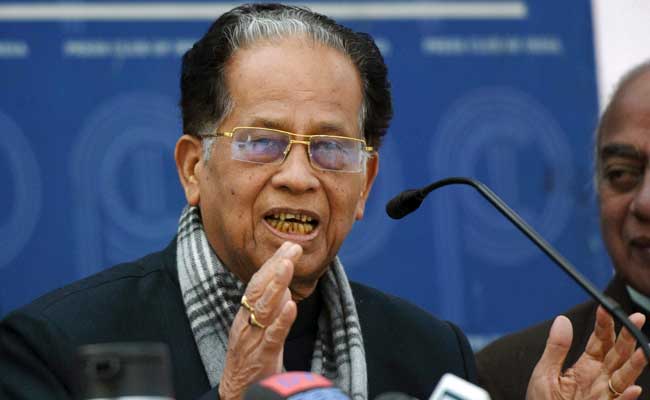 Former Assam Chief Minister Tarun Gogoi accused the BJP of "failing" to deliver on its promise.

The Congress party in Assam has hit out at the ruling Bharatiya Janata Party (BJP) accusing it of turning the National Register of Citizens (NRC) into a "wastepaper" for trying to appease its Hindu vote bank.

The accusation comes after Assam Chief Minister Sarbananada Sonowal hinted that the government might think of challenging the Supreme Court's decision of rejecting the central and Assam government's plea for sample re-verification to find out wrongful inclusions of names.

Former Assam Chief Minister Tarun Gogoi on Tuesday accused the BJP of "failing" to deliver on its promise of "throwing out Bangladeshis."

"The fact that they have failed to make a proper NRC. This is a shame for government of India, they took more than five years. My question is why new legislation is needed. So it's clear they prepared erroneous and it will be a waste paper, now what kind of new legislation they would bring I don't know," Mr Gogoi said.

Mr Sonowal on Monday indicated that the government may explore legislative options to deal with the wrongful inclusion of some names in the NRC after its final publication.

"In a democracy, everyone has the right to ask questions. After the publication of the NRC on August 31, if necessary in future, we will take whatever steps will be required," Mr Sonowal had said.

In the last two months, the Supreme Court has thrice turned down the plea of the BJP-led Centre and state government for a re-verification of the draft NRC alleging inclusion of illegal migrants and exclusion of Indian citizens.

The Congress, however, sees this as a political ploy of the BJP. "Who is responsible for the wrongful exclusion? BJP had promised to detect foreigners deport them, but now they admit foreigners have made it to NRC, they have failed to keep their promise, last four years, they were not accusing NRC authorities. Only last three months they are blaming," Mr Gogoi said.

"It is the home ministry which is responsible. And there Hindutva card is coming in between, we are also asking that lot of Bengali Hindus were left out, they are BJP's ardent supporters even then we are asking to include them, but we are not making the religion a political issue," he added.

The state unit of the BJP, however, said an NRC with even the name of a single "Bangladeshi" is a threat to "national security."

"If large amount of illegal foreigners enter the NRC that what can we do? We have to think of correctional measures to weed out illegals... we have lot of respect for Supreme Court that's why the NRC is coming out on August 31, our government at the Centre and state are fully cooperating," state BJP spokesperson Bijon Mahajan said.

The ministry of home affairs has also decided to amend citizenship rules to grant a window of 120 days to those who would be excluded from the final NRC to appeal to the foreigners' tribunal. At present, the deadline is 60 days. Over 40 lakh people were dropped from the draft NRC published last year.