Ruling BJP has promised to start an "anti-radicalisation cell" against anti-national elements in Gujarat should the party be voted back to power in the forthcoming Assembly elections. "Complete implementation" of the Uniform Civil Code and creation of 20 lakh jobs are among the other major promises made by the party in the poll-bound state.

Releasing BJP's election manifesto in Gandhinagar today, JP Nadda, the party's national president, said the "anti-radicalisation cell would identify and eliminate the threats of destabilisation as well as the sleeper cells of radical groups, terrorist organisations and anti-India forces".

Mr Nadda's comments bear an echo with what Union Home Minister Amit Shah had said yesterday. Addressing an election rally in Gujarat, Mr Shah said that those responsible for communal riots in Gujarat were "taught such a lesson" that the state has been peaceful for 22 years.

"During the Congress rule in Gujarat [before 1995], communal riots were rampant. Congress used to incite people of different communities and castes to fight against each other. Through such riots, Congress had strengthened its vote bank and did injustice to a large section of the society," Mr Shah said.

Elections are scheduled to be held in Gujarat on December 1 and 5 and votes will be counted on December 8.

While releasing the BJP's election manifesto, the party president said today: "A new law will come into force that will help identify those who damage private and public properties. These anti-India forces will be identified and penalised."

He added: "We will ensure complete implementation of the Gujarat Uniform Civil Code Committee's recommendations." 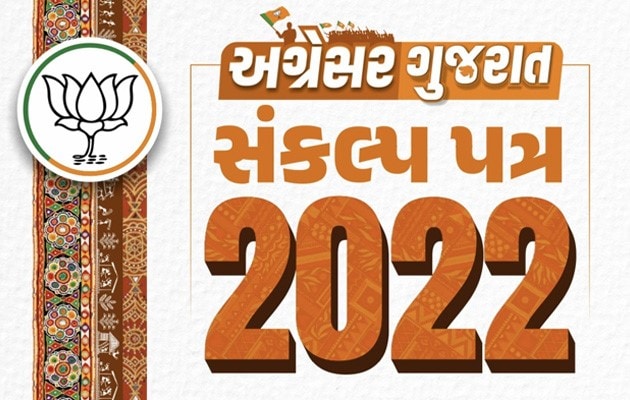 The BJP election manifesto for Gujarat was released in Gandhinagar today

Taking a swipe at the opposition, Mr Nadda claimed: "Opposition parties making fake promises are free to do so because they're never going to come to power. So they're not even accountable, unlike the BJP."

He said apart from establishing a Gujarat Institute of Technology, 20,000 government schools will be converted into Schools of Excellence and 20 lakh employment opportunities will be generated for the youth.

Rs 10,000 crores for developing agricultural marketing infrastructure, Rs 25,000 crores for irrigation facilities, offering medical insurance worth Rs10 lakhs under the Ayushman Bharat scheme, developing three medicities and two state-of-the-art hospitals in the state are among the other promises made by the party in its manifesto.

The manifesto also promised Shramik Credit Cards for labourers with collateral-free credit up to Rs 2 lakh.

The BJP has promised to complete the Gandhinagar and Surat Metro corridors and begin work on the first Metro rail service at Saurashtra (Rajkot) and Central Gujarat (Vadodara).

Mukhyamantri Free Diagnostic Scheme with a corpus of Rs 110 crores will ensure free-of-cost diagnostic services for households belonging to the economically weaker sections.

For the tribals in the state, the BJP in its manifesto promised to enable mobile delivery of ration across all the 56 Tribal Sub-Plan Talukas in the state and ensured Rs 1 lakh crore under the Vanbandhu Kalyan Yojana 2.0 for the all-round socio-economic development of tribals.

The manifesto added that the Birsa Munda Adi Jati Samriddhi Corridor between Ambaji and Umergram will spur growth by connecting every tribal district headquarters with a four-six lane highway and by constructing a tribal cultural circuit that will connect Pal Dadhvaav and the Statue of Unity to Shabari Dham.

On the religious front, the party has promised to work on the Devbhumi Dwarka Corridor to establish it as western India's biggest spiritual centre, comprising the World's tallest Shree Krishna statue.

Google To Make Changes To Android In India After Antitrust Setback