India's history and culture do not promote "sectarianism or bigotry", she asserted while addressing a public programme. 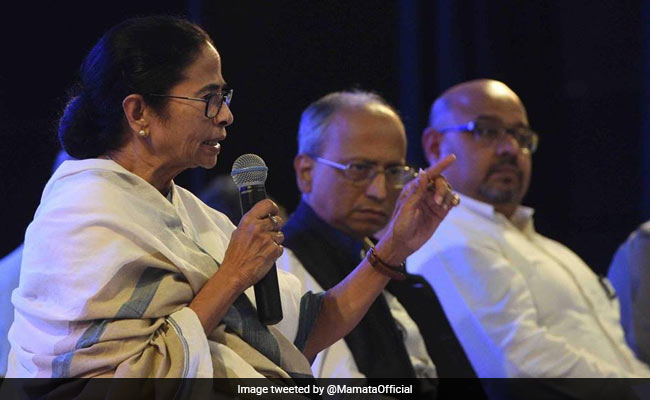 West Bengal Chief Minister Mamata Banerjee Tuesday accused the BJP of trying to "distort" the country's history to create a rift among the masses on religious lines.

India's history and culture do not promote "sectarianism or bigotry", she asserted while addressing a public programme here.

"Those trying to distort our secular history should know that the people of Bengal will neither encourage nor allow divisive politics," the chief minister said.

Ms Banerjee also lashed out at the BJP-led government in Assam and the Centre for leaving out names of 40 lakh people from the 'complete draft' of the National Register of Citizens (NRC).

"In Assam, they (BJP) are trying to drive out 40 lakh people, including Bengalis, by omitting their names from the NRC draft.

"There had been reports of suicides by people who found their names missing from the draft. I wonder what will their counterpart (BJP Bengal unit) here will have to say about this" she asked.

Drawing parallels between the NRC exercise and exodus of Bihari migrants from Gujarat, Ms Banerjee said both the BJP-ruled states are trying to divide people on the basis of caste, creed, race and religion.

"While they are driving away Bengalis in Assam, they are also ousting Biharis from Gujarat.The Constitution of our country teaches us to treat everybody equally. We cannot differentiate between people on the basis of caste, creed and religion," she said.

The rape of a 14-month-old girl in Gujarat's Sabarkantha district on September 28 and the subsequent arrest of a labourer from Bihar for the crime led to sporadic incidents of violence against Hindi-speaking people in the western state.

More than 60,000 Hindi-speaking migrant labourers have fled the state.

The Trinamool Congress (TMC) supremo alleged that the BJP had no regard for Gandhian principles.

"Let us not forget Mahatma Gandhi's principles. Gandhiji had observed fast at the Beleghata area of Kolkata to stop religious riots. Let us not allow those who want to change the history of the country, the history of Gandhiji, to succeed," she appealed to the masses.

Talking about distribution of land right documents in Cooch Behar, Ms Banerjee claimed her government was working hard to give beneficiaries their due.

Bangladesh and India exchanged 162 "adversely held" enclaves on Aug 1, 2015, at the stroke of midnight, ending one of the world's most complex border disputes that had lingered on for seven decades.

All Indian enclaves were located in Cooch Behar.

The enclave residents were allowed to either reside at their present location or move to the other country.

The chief minister, while chairing an administrative meeting Monday, had asked the district officials to speed up the process of handing over land documents to enclave dwellers.

If necessary, an ordinance would be issued to speed up the process, she had said.

Slamming the Centre for allegedly spending more on advertisements, less on development programmes, Mr Banerjee said the NDA government should take a cue about running projects and schemes from Bengal.

"In Bengal, we have allocated nearly 6,000 crores for various development schemes... Our schemes have been universally acclaimed. You (BJP) should learn from us," she said.