Trinamool leader and minister Subrata Mukherjee said the incident would be investigated, but also indicated that there may be two sides to the story 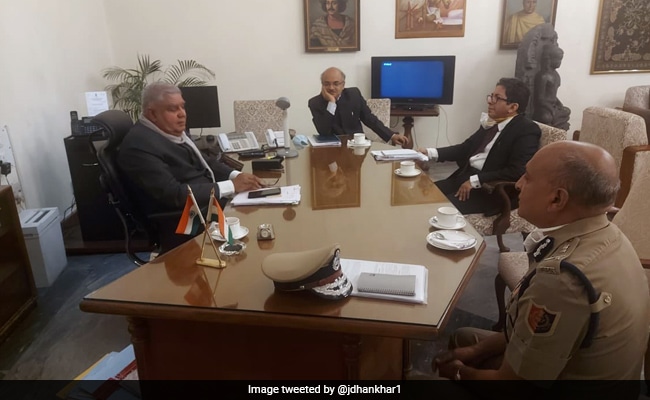 Bengal governor Jagdeep Dhankhar tweeted Thursday afternoon - shortly after the BJP accused the ruling Trinamool of orchestrating an attack on party chief JP Nadda's convoy near Kolkata - and declared himself "concerned at alarming reports of anarchy and lawlessness" in the state.

In tweets targeting Chief Minister Mamata Banerjee and her government, Mr Dhankhar said the alleged attacks took place "in spite of my alerts to Chief Secretary and DGP early morning" and that the incident reflected a "collapse of law and order".

Mr Dhankhar also said he had messaged the Chief Secretary at 8.19 AM, and said: "Time for SP (Superintendent of Police) Diamond Harbour to act (like) a public servant." The governor said he received a response at 8.30 AM: "Respected Sir, alerted and sensitized DGP accordingly. Regards."

"Events indicate total abdication of lawful authority," he raged, "As constitutional head I share my shame with you (Ms Banerjee) as it is on account of your acts of omission and commission

Trinamool leader and minister Subrata Mukherjee said the incident would be investigated, but also indicated that there may be two sides to the story.

"Was there provocation? Can't blame Trinamool workers just because BJP says so," he said.

Earlier, a dramatic video was shared online in which a car, said to be part of the BJP chief's convoy, was seen attacked with bricks and stones. The video showed the car's windscreen shattering.

"If I have reached here for the meeting, it's due to Ma Durga's grace," Mr Nadda, who was travelling to Diamond Harbour in South 24 Parganas near Kolkata for a meeting, later said.

Mr Nadda is on a two-day visit to Kolkata - one of several made by high-profile leaders over the past few weeks as the BJP preps its campaign for Assembly polls due in six months.

Last month Home Minister Amit Shah set his party a target - win 200 of 294 Assembly seats. "Those who want to laugh at this - let them laugh... But BJP will win more than 200 seats," he warned.