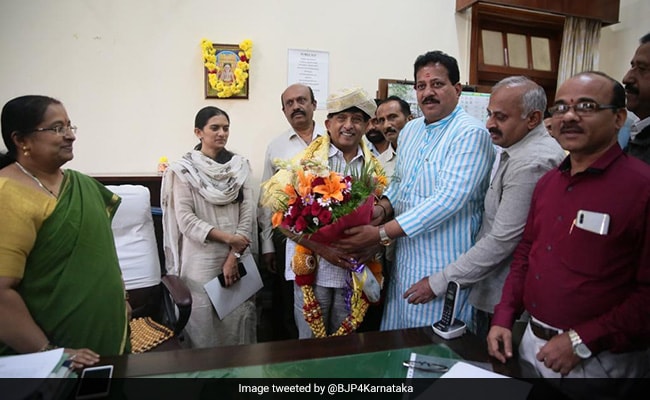 KC Ramamurthy had resigned from the Congress and subsequently joined the BJP.

BJP candidate KC Ramamurthy was on Thursday declared elected unopposed to the lone Rajya Sabha seat from Karnataka, for which bypoll was necessitated following his resignation as the Congress member.

"With other political parties not fielding any candidates, and nomination of two independent candidates being rejected as it had no proposers, Ramamurthy had no opponent to contest the bypoll scheduled for December 12; so he has been declared unopposed," Karnataka Assembly Secretary and the returning officer for the election MK Vishalakshi told PTI.

Congratulating Mr Ramamurthy on his election, Chief Minister BS Yediyurappa in a statement said his unopposed election would not only increase BJP's strength in the Rajya Sabha, but also will strengthen the party.

Mr Ramamurthy, who represented the Congress in the Upper House and whose term was up to June 2022, tendered his resignation as a member on October 16 to the House Chairman and Vice-President M Venkaiah Nadu, who accepted it.

The former IPS officer had also resigned from the Congress and subsequently joined the BJP.

Following Mr Ramamurthy's resignation, the Congress in Karnataka had alleged that BJP has made it an "industry" to lure everyone to the party, and people were joining it out of "fear" or for the sake of "allurements."

However, stating that he resigned as Rajya Sabha member and from the Congress as he wanted his experience to be "used properly in the the path of progress and development", Mr Ramamurthy had rubbished claims he quit the party under pressure or fearing Income Tax raids.