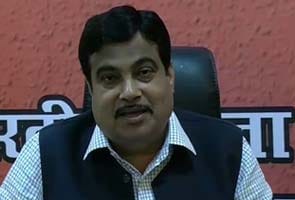 New Delhi: After a meeting that was skipped by both its senior-most leader and party president Nitin Gadkari, the BJP reiterated  its support for Mr Gadkari, who is accused of financial improbity, and urged its members not to air views that can hurt the image of the party.

Attempts failed to persuade LK Advani to attend the meeting of the core group that preceded the endorsement.

Mr Gadkari's term as President expires in six weeks but sources say Mr Advani wanted him removed immediately and was keen to fill the vacancy himself.

He was over-ruled despite a high-decibel revolt by a faction of the BJP today, led by lawyer and parliamentarian Ram Jethmalani.

The BJP said Mr Advani was not present because he had been briefed in advance by S Gurumurthy, designated by the BJP's ideological mentor - the RSS, to outline Mr Gadkari's defence, which has been accepted already by the RSS.

After Mr Gurumurthy walked the BJP's other senior leaders through Mr Gadkari's rebuttal, the party said that Mr Gadkari is not guilty of "legal or moral wrongdoing" though the Purti Group that he co-founded 12 years ago appears to have been propped up by ghost investors. Those shell companies are being investigated by the government for charges ranging from money-laundering to tax evasion.

The RSS staged an intervention today as a section of the party demanded that it should not sacrifice its credibility by standing by its president.

In the surge of dissent lie the attempts of other A-listers from his party to position themselves as Mr Gadkari's replacement, and to recalibrate power within the BJP by reallocating important posts.

The camps who are backing or fighting Mr Gadkari are motivated by calculations of who will replace him. Chief Minister Narendra Modi is poised to comfortably deliver Gujarat to the BJP in December, a victory that will make it tough for the party to wriggle out of giving him the prize he covets - being its candidate for prime minister. Sources say Mr Modi would like to see Arun Jaitley as party president. Mr Jaitley, who is Leader of the Opposition in the Rajya Sabha, has not defended Mr Gadkari in the current scandal.

In a letter to Mr Advani on November 2 that was made public today, Mr Jethmalani said that he was supported by three BJP stalwarts - Yashwant Sinha, Jaswant Singh and Shatrughan Sinha - and that together, they were considering "bidding goodbye" to the party over its defence of Mr Gadkari.

But after conferring with Mr Gurumurthy in the early evening, Mr Jethmalani said that he had been convinced that the RSS had asked Mr Gadkari for a detailed response to the charges against him and is satisfied with his explanation.

The RSS has called for "an impartial probe" to verify the charges against Mr Gadkari but also warned over the weekend that "the president will not be removed as the result of any sort of conspiracy."
Comments
Nitin Gadkari