The massive victory threw the spotlight on Biplab Kumar Deb, who took over two years ago as the BJP's Tripura chief, its youngest in any state.

Biplab Deb is credited with building the party virtually from scratch in Tripura.

Agartala: Biplab Deb, 48, will take oath on Friday as the next Chief Minister of Tripura, sources have said. An official announcement is expected on Tuesday after a meeting of the BJP's newly-elected legislators, which union ministers Nitin Gadkari and Jual Oram will oversee as central observer.

The BJP stunned the Left, in power in Tripura for the last 25 years, winning 43 of the state's 60 seats along with a regional partner Indigenous People's Front of Tripura (IPFT) in assembly elections, results for which were announced on Saturday. The BJP has won 35 seats on its own, well over the 31 it needed for a majority. It had won no seat five years ago.

The massive victory threw the spotlight on Biplab Deb, who took over two years ago as the BJP's Tripura chief, its youngest in any state. "Legislature members will decide who should be made the Chief Minister in a democratic way as BJP believes in democracy. BJP President Amit Shah and PM Modi know how to give right direction to public's suggestion," Mr Deb today said. 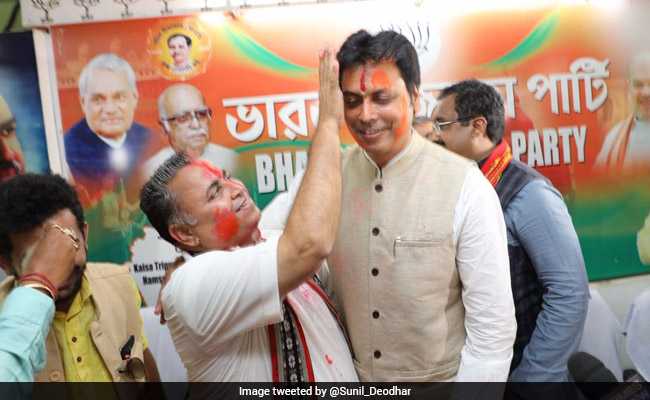 Mr Deb has been a front-runner for the post. The BJP's Tripura partner IPFT did suggest that a tribal lawmaker be named chief minister, but it does not have the numbers to press its demand.

Tripura was considered the Left's strongest citadel, presided over by the CPM's Manik Sarkar, 69, who had been chief minister for 20 years and was seeking re-election for the fifth consecutive term. On Saturday, the Left could win only 16 seats, down 33 from last time.

In Mr Deb, the BJP sent to Tripura a young leader trained by its ideological mentor, the RSS or Rashtriya Swayamsevak Sangh, and mentored by Sunil Deodhar, the BJP's Tripura in-charge known for managing Prime Minister Narendra Modi's campaign in the 2014 national election in his parliamentary constituency Varanasi.

He is credited with building the party virtually from scratch since then. A BJP assessment in 2017, the party said, showed that Biplab Deb was more popular than Manik Sarkar in Tripura.

Mr Deb was born on November 25, 1969 in a middle class family in Tripura's Gomati district, in a village called Rajdhar Nagar. His father Hirudhan Deb was a local leader of the Jan Sangh, from which the BJP was born.

Biplab Deb graduated from Tripura's Udaipur College in 1999 and left for Delhi soon after to join the RSS, where he was a volunteer for 16 years, training under prominent leaders Gobinda Acharya and Krishnagopal Sharma.

Promoted
Listen to the latest songs, only on JioSaavn.com
He replaced Sudhindra Dasgupta, the longest-serving BJP chief in Tripura, in January 2016. Mr Deb's wife Niti is an officer at State Bank of India and they have a son and a daughter.

The Tripura BJP chief has sought to explain that he is not a former gym instructor, as media reports had suggested. "During a television interview, I said I used to visit the gym to exercise, but now I do not get any time to exercise. I am surprised how the media reported that I was once a gym instructor," Biplab Deb told news agency Press Trust of India.