Sources told NDTV the committee believes poorly-maintained systems aggravated a flood crisis that has affected over 81.44 lakh people across 16 districts in Bihar 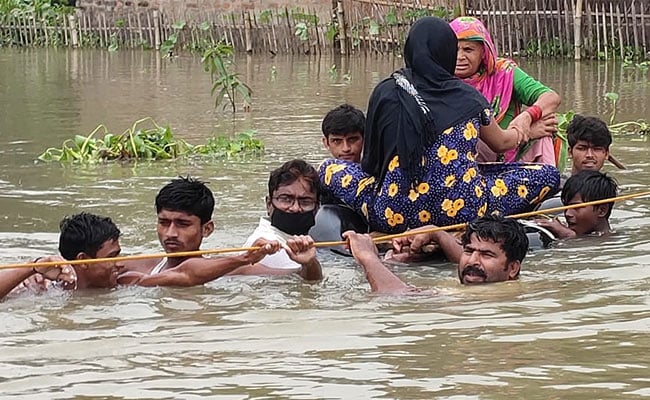 Bihar floods have affected over 80 lakh people across 16 districts in the state, so far

Sources have told NDTV that the committee believes the poorly-maintained systems aggravated a flooding crisis that has affected over 81.44 lakh people across 16 districts in the state.

The Nitish Kumar government, however, has blamed Nepal for the flood crisis; the state disaster management department has claimed that rivers originating in the neighbouring country and flowing into north Bihar were wreaking havoc.

According to sources the Parliamentary Standing Committee has instructed officials to take urgent steps to reinforce flood management measures, including starting dredging, or anti-silting, operations in rivers flowing through border areas.

They had been specifically told, the sources said, to fix accountability for managing embankments.

A member of the Standing Committee expressed concern that some embankments along the India-Nepal border had been washed away and responsibility must be fixed to hold officials accountable.

Last week a state bulletin said several rivers, including the Baghmati, Burhi Gandak and the Khiroi, were flowing above danger levels. The bulletin also said embankments under the Water Resources Department were safe.

Water Resources Minister Sanjay Jha also visited affected regions to assess the condition of these embankments and status of repairs.

This was after panic in Gopalganj district last month because the Gandak river breached its embankments at multiple places - some as wide as 40 metres. Nearly 50,000 people living in 45 villages in the district were in danger.

The Parliamentary Standing Committee has now decided to summon officials from the Ministry of External Affairs and central government think-tank NITI Aayog.

Ministry officials have been asked to brief the committee on diplomatic steps to be taken in addressing the flood problem in border districts. NITI Aayog officials will be expected to make presentations on special policy steps needed to initiate measures as part of the Border Area Development Program.

The committee, meanwhile, has also expressed unhappiness at the apparent lack of co-ordination between different government departments. Construction of power projects in Arunachal Pradesh, for example, has been initiated without proposed plans to combat flooding in a flood-prone state.

The floods in Bihar have affected Darbhanga and Muzaffarpur districts the most, with 20.61 lakh people and 18.98 lakh people affected, respectively. East Champaran district has seen over 10 lakh people hit.

A total 12,670 people are staying in 10 relief camps and 5.85 lakh people are being provided food in 723 community kitchens in the affected district, the government has said.