The National Crisis Management Committee headed by Cabinet Secretary Rajiv Gauba this morning reviewed the flood situation in Bihar, where 16 districts have been affected by the deluge. 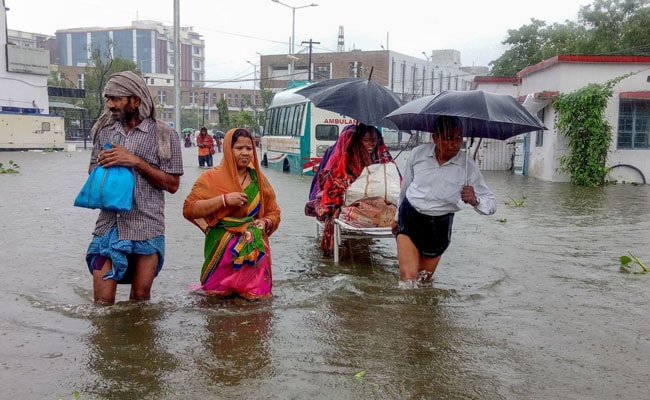 Patna water-logged due to heavy rainfall

The Centre has dispatched 20 teams of the NDRF and pressed into service Indian Air Force helicopters to help flood-hit people in Bihar, officials said on Monday.

The National Crisis Management Committee (NCMC) headed by Cabinet Secretary Rajiv Gauba this morning reviewed the flood situation in Bihar, where 16 districts have been affected by the deluge.

Twenty teams of the National Disaster Response Force (NDRF), comprising about 900 rescue persons, have been deployed in the state.

Six of the teams were deployed in capital Patna, which has witnessed very heavy rains and water logging over the past three days, a home ministry official said.

Two helicopters of the Indian Air Force were also deployed in rescue and relief operations.

The Bihar government has informed the NCMC that due to extremely heavy rainfall in the state, along with high levels of water in the rivers, there has been flooding in 16 districts.

Extensive evacuation, rescue and relief efforts have been undertaken by the state government machinery, in which all assistance has been rendered by the NDRF and other central agencies, the official said.

Four heavy duty pumps, made available by the Ministry of Coal are reaching Patna and the pumps would be used to drain out about 3,000 gallons of water per minute from water logged areas.

Essential supplies of food and drinking water are being supplied by the state government and efforts are on for restoration of electricity in flood affected areas.

While teams from central ministries have already carried out assessment of damages in the state, a fresh visit would be made by them to take stock of the current situation, another official said.

The India Meteorological Department (IMD) has stated that while there has been very heavy rainfall in Bihar over the past few days, the situation is improving now.

The Cabinet Secretary took stock of the current situation, preparedness, rescue and relief operations and directed that immediate assistance, as sought by the state, be provided to meet the crisis.

Senior officials of the Ministries of Home and Defence, as well as those from the IMD, the NDRF and the Central Water Commission attended the meeting this morning.

The chief secretary and other senior officers from the Bihar government participated in the meeting through video conference.
At least 40 people have so far lost their lives in Bihar floods.