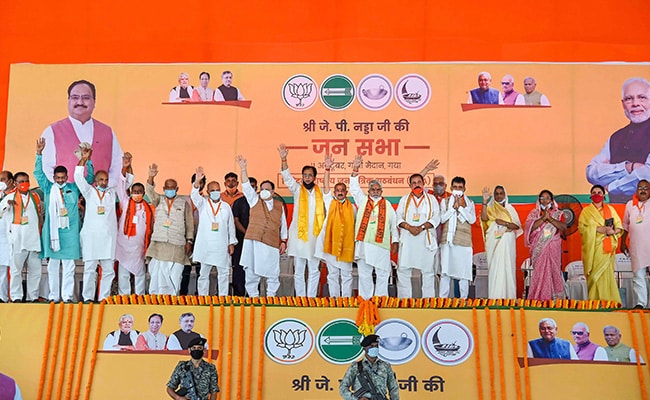 The country is safe in the hands of Prime Minister Narendra Modi as is Bihar's progress under the leadership of Nitish Kumar, BJP president JP Nadda said on Sunday as he started the ruling coalition's election campaign from Gaya with the first post-COVID-19 public rally in the state.

"Modi hain to mumkin hain aur Nitish hain to sambhav hai (Modi, Nitish make it possible)," he said, in a riff on the BJP's 2019 slogan hailing PM Modi. "Leadership of India is secured in the hands of Prime Minister Narendra Modi and it is important that the leadership of Bihar is secured with Nitish Kumar," the BJP chief added.

Mr Nadda urged voters to pick Nitish Kumar once again, saying there has been a surge in development in the last 15 years especially since 2014 when the Modi government came to power at the centre.

Although he did not Chirag Paswan, a member of the BJP-led National Democratic Alliance (NDA) that is running separately this time over differences with the Chief Minister, Mr Nadda appeared to downplay the episode, saying elections are not friendly contests.

The BJP chief praised the Chief Minister's handling of the coronavirus crisis, saying, "Nitish Kumar took care of the people during the COVID-19 pandemic. Financial assistance was also provided by his government to those outside the state."

Mr Nadda is on a day-long visit to Bihar to oversee the BJP's poll campaign, a day after the party's high-level meeting in Delhi attended by PM Modi and Union Home Minister Amit Shah. He arrived on a special plane in Patna where he was given an enthusiastic welcome by party workers outside the airport.

The party also released its second list of candidates for the state elections that begin on October 28, announcing 46 more names following the 27 announced earlier.