BJP, Ahead In Bihar, Is Cautious As Covid Slows Down Counting

Bihar is the first state to vote in the time of COVID-19 and it has impacted the process. 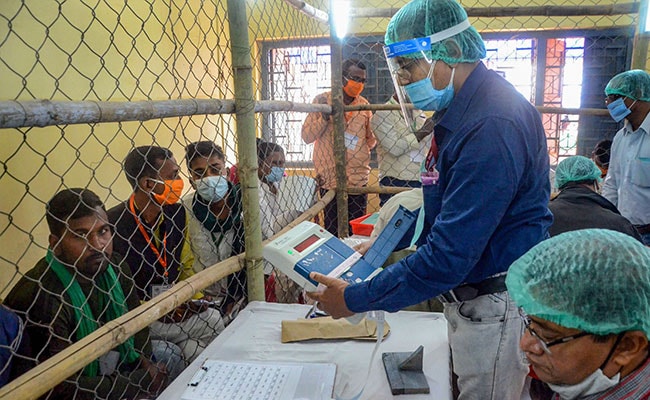 Bihar election results: The counting could go to 35 rounds

As leads from the counting of votes in Bihar showed the ruling National Democratic Alliance (NDA) narrowly ahead and the Tejashwi Yadav-led opposition catching up, the BJP held off on the victory celebrations that usually start when it crosses the majority mark in leads, or when it is at least within striking distance of power.

Around late afternoon, the party appeared to be prepping for celebrations at its Delhi headquarters. The roads were being cleared outside the office. But later in the evening, the fluctuating situation once again cast uncertainty on its plans. Reports suggested many of the workers gathered at the BJP office started leaving as BJP president JP Nadda showed no signs of arriving.

Most political parties refused to commit to any clear trend or result, pointing out that the counting of votes would be a far longer process because of the coronavirus safety measures.

Bihar is the first state to vote in the time of COVID-19 and it has impacted the process.

"We hope to finish the counting as per procedure late tonight," said Chandrabhushan Kumar, Election Commissioner.

The Election Commission said around 42 per cent of the votes had been counted as of 4 pm. Usually in an election, analysts and TV networks call the election.

Sources in the BJP said since the counting was slow, only 10 per cent of the votes would have been counted by 10 am, when the NDA was seen crossing the majority mark of 122 in the 243-member assembly.

The results were harder to predict with the margin ranging from 1,000 to as low as 500 in several seats.

Between the swings, what was consistent was the BJP maintaining its lead over ally Nitish Kumar's Janata Dal United, which is staring at the prospect of losing Big Brother status in the NDA coalition.

Another persistent trend was the RJD-led opposition putting up a fight; exit polls had predicted its win.

Bihar voted in three rounds from October 28 to November 7.