"The chief minister told us that he agreed with our demand for a caste based census. He said he was leaving for Delhi later in the day. Upon his return on August 02 he will write to the Prime Minister and seek an appointment", Tejashwi Yadav said. 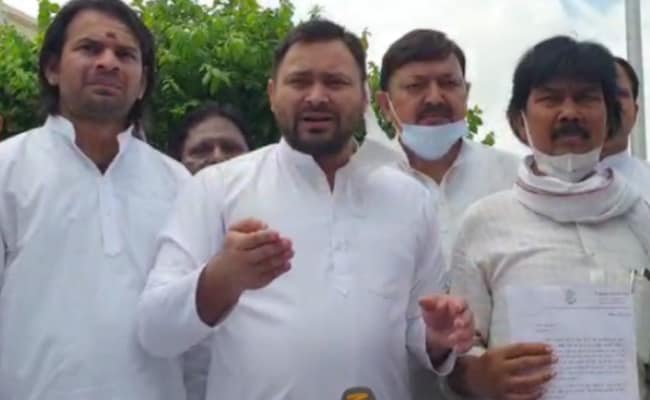 Nitish Kumar, an OBC himself, too has repeatedly spoken in favour of holding a caste-based census.

Bihar Chief Minister Nitish Kumar has agreed, in principle, to take up the issue of a caste-based census with Prime Minister Narendra Modi, leader of the opposition Tejashwi Yadav claimed on Friday.

Mr Yadav said this while talking to reporters after calling on the chief minister inside the assembly premises, leading a delegation of leaders of the five-party Grand Alliance helmed by his RJD.

The Centre's recent statement in the Parliament that a caste-based census would include only the Scheduled Tribes and Scheduled Castes has triggered a fresh demand for inclusion of the OBCs, who dominate the political scenario in Bihar post implementation of the Mandal commission report.

"The chief minister told us that he agreed with our demand for a caste based census. He said he was leaving for Delhi later in the day. Upon his return on August 02 he will write to the Prime Minister and seek an appointment", Mr Yadav said.

The former Deputy Chief Minister has been suggesting that the chief minister should meet the PM heading a delegation, which could include the leader of the opposition, to broach the subject.

Notably, Mr Kumar, an OBC himself, too has repeatedly spoken in favour of holding a caste-based census and recently urged the centre to reconsider its stance on the issue.

Besides, resolutions in support of a caste-based census have been passed unanimously by both Houses of the state legislature in the past.

Mr Yadav claimed, "we also proposed that in the event of the centre not agreeing to the demand, the state should consider holding such an exercise on its own like Karnataka did a few years ago. The Bihar chief minister said he was not aware of the same but would look into this alternative as well."

A "social and educational survey" was held in the southern state way back in 2015.

At present the Congress, which was then in power, is engaged in a tussle with the ruling BJP over the latter's apparent reluctance to make public the findings of the survey.

The RJD leader sought to give a wide berth to questions about alleged disparaging remarks against Biharis made by an MP of the ruling Trinamool in West Bengal.

"I have not heard the statement myself. Yesterday you (journalists) came to me with a statement purportedly made by a Trinamool MP who has sought to refute the remarks attributed to him", said Mr Yadav referring to controversial utterances of Mohua Moitra.

BJP MP from Godda in Jharkhand Nishikant Dubey has alleged her of calling him a "Bihari Goonda" during meeting of Parliamentary Committee on Information Technology Wednesday.

When pressed further, upon being told that his father Lalu Prasad was accused of having favoured people from Bihar during his tenure as Railway Minister, Mr Yadav quipped "such things should not be said. People from all parts of the country are free to secure jobs wherever they choose or find an opportunity."